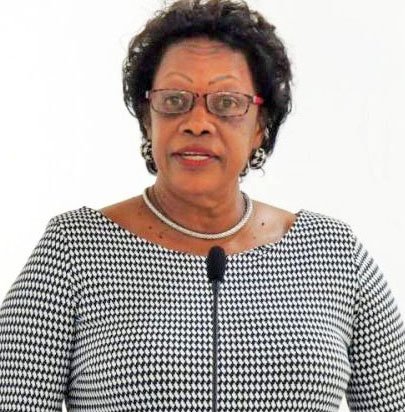 Minister for Agriculture & Lands Yolande Bain-Horsford symbolically hands over one of the Praedial Larceny boots to ACP Francois during the launch of the new hotline on Tuesday.

Farmers can expect a quicker response from the Praedial Larceny Task Force whenever they reach out to the police for help when their crops are stolen or destroyed.

Government has launched a new 24-hour Praedial Larceny hotline as part of a partnership between the Ministry of Agriculture & Lands and the Royal Grenada Police Force (RGPF).

The hotline number (435-0300) or short code (300), was introduced during a special media launch at the Ministerial Complex on Tuesday and is considered as a move that will strengthen the Ministry’s commitment and efforts towards stamping out praedial larceny in the tri-island state.

The launch comes days after longstanding Sergeant of Police, Kester Young was charged with stealing nutmegs from a farmer’s land in Chantimelle, St. Patrick.

Minister for Agriculture and Lands, Yolande Bain-Horsford said that the new hotline seeks to deal with issues in real time as opposed to “sometime somebody (have an issue and) call the police station but may have to wait”.

“…That line (would be) clear, waiting for a call on praedial larceny matters,” she remarked.

As a partner in this initiative, RGPF will manage the praedial larceny hotline, which will be operated from the Radio Control Centre at Police Headquarters, Fort George.

Describing the launch as being “timely,” Acting Assistant Commissioner of Police (ACP) Michael Francois said, “it would give our farmers an opportunity to report in a timely manner incidents that are taking place on their farms in various areas of the country and receive a response in a timely manner”.

“You would have heard complaints before of persons calling into various police stations, sometimes the phones may be busy or persons may not get a response at the time that you would want to. What this particular initiative would do is to ensure that at a Control Centre that operates 24 hours, the information can be relayed to any particular area in Grenada that the report is made,” he added.

ACP Francois went on: “Now we are not saying that you are not supposed to call the police station in the area where you are – what we are advising and encouraging is that you also use the 300 hotline that would ensure that a responsible individual that would be there (in the Control Centre) at any particular time with supervision from senior persons (that) would ensure the complaint is dealt with and followed through to the end.”

Praedial larceny has become a scourge in society and results in hundreds and even thousands of dollars in losses to local farmers.

Having recognised the need to have greater public participation in the fight against praedial larceny, Minister Bain-Horsford also announced plans to commence a rigorous public awareness and education campaign to ensure that the general public is aware.

The female minister also handed over 50 boots to ACP Francois to assist with the work of the Praedial Larceny Task Force.