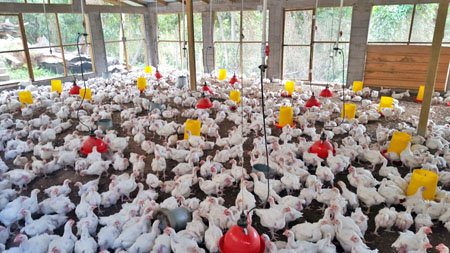 Thousands of poultry birds face starvation and death in Grenada with projected losses in the millions, after the shutdown of the feed processing plant in St George due to COVID-19 infection at the plant.

The company was ordered by the Ministry of Health to cease operations after one case of the virus was detected among the staff just over a week ago.

Another three workers have tested positive within days of the first case, with the latest one being announced Tuesday, bringing the total number of positive cases at the company to four out of Grenada’s 19 laboratory confirmed cases of the virus.

But with the mill on lockdown, farmers are now unable to access feed for their birds and reserved supplies are running low, while some have run out of feed altogether.

There are 500 poultry farmers registered with the Grenada Poultry Association and over 60, 000 birds on hand.

“To be very honest with you, farmers are in a nightmare situation with (the company) being shut down due to COVID-19 infection,” he said.

According to Phillip, the local poultry farmers “have no access to feed” and that “having nothing to feed the birds between now and Wednesday will be catastrophic.”

The company, which has a monopoly, has been granted a licence by the Ministry of Trade, to import flour from Barbados and feed from Trinidad and Tobago and the shipments are due to arrive by next week Wednesday but poultry farmers say this will be too late.

The company currently has feed in stock and is willing to deliver feed to the entry gate to the plant, however this proposal was not accepted by the Ministry of Health.

Merrick George, a farmer with thousands of birds to feed said “we will lose all our birds due to starvation.

“If something doesn’t happen tomorrow to give us that feed we will have no industry. Chickens can’t wait eight days to get feed. We can’t wait,” George lamented.

“We are calling on the government to use the protocols they have established and give the feed to us so we can save our industry.

While the feed is on its way our chickens will be dying,” he said.

Poultry birds can survive and remain healthy for three days without food and two days without water but most small and mid-sized farms and some large ones are running low or have no feed since the Ministry ordered the Mill closed more than a week ago.

George, who said he is speaking as an individual farmer facing a serious crisis, is worried that the lack of feed will result in job losses and financial losses to farmers.

“I am speaking as a farmer who has staff who may have to be sent home, so I am calling on the government, please, next week Wednesday is eight days too late. Poultry farmers in Grenada are desperate,” he added.

There are poultry farmers with as little as 50 birds and others with as much as 8000.

According to George, government needs to protect the country from COVID-19 and also from threats to food security.

“We understand COVID-19 is a serious and deadly issue but you have to protect us all round. Protect our food security too.

“There are farmers who have mortgaged their homes to start farms, this is how they feed their children and to lose their farms would be a calamity.

The GPA president said farmers are pleading with the Minister of Health and the government to take measures to save the industry.

“It’s a plea at this point because we have had no communication from those in authority. (The company) has a monopoly on feed so we cannot source on our own, elsewhere. Instead of creating an additional disaster, let us have the feed,” he added.