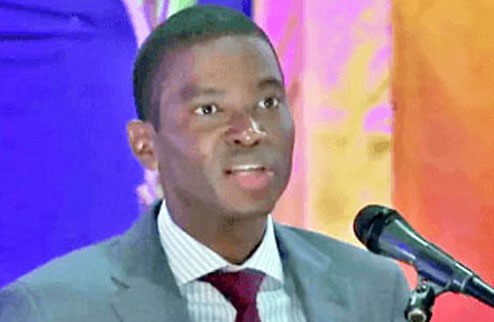 Dickon Mitchell – campaigning for the job of Prime Minister

The female political figure who has worked in regional elections said the NDC is poised at this stage to defeat NNP at the polls provided that they know how to handle the opportunity that is there for the party to convince the electorate to bring about regime change.

She told THE NEW TODAY that Congress needs to launch a serious attack on the recent utterances made by Prime Minister Mitchell for the people of Grenada to give him a final term in office.

She said that NDC should liken this as similar to the decision taken by the West Indies cricket selectors to deny the aged former test player Chris Gayle the opportunity to play his final game for the regional team in front of his hometown fans in Jamaica.

“(NDC must) tell them (the electorate) don’t pick him (PM Mitchell) – just as Chris Gayle wanted his last match and they didn’t pick him, he’s expired, he can’t perform – look at you (PM Mitchell) you pleading to give you your last play on the match.

According to the political strategist, Congress must think in terms of approaching the attack on PM Mitchell like a cricket match and should be aware that to defeat the incumbent that they have to bowl at him “in the corridor of uncertainty.”

“You have to (get) him on the defensive. I don’t know who those fellahs (in NDC) strategists are but all of those things they should be taking that into consideration,” she remarked.

Congress is now under the leadership of a 44-year old Attorney-at-law, Dickon Mitchell who has been visiting many parts of the country to meet with people in their various communities.

The female strategist suggested that the best way for the opposition to deal with Dr. Mitchell is “to hold the rope tight on him and let him do stupidness” like in 2008 when he was soundly beaten 11-4 by Congress at the polls.

“When Keith get the pressure I believe that he’s going to do stupidness – he can’t take pressure,” she remarked.

According to the political strategist, this upcoming election is one for the NDC to go on an all-out attack on the stewardship of Prime Minister Mitchell and NNP in their two terms in office.

She said the aging NNP leader is not assured of the youth vote as in past elections in the current battle and has hurt himself politically by removing St. Andrew North-east Member of Parliament, the youthful Kate Lewis from the portfolio and placing it in his hands.

She stressed that Dr. Mitchell has done nothing to fire the imagination of the young people since taking over the portfolio.

“He should be leading and go down on the ground with the youth but he has been hiding because of Covid. He’s not going on the ground as Dickon (Mitchell) is doing among those youth.

He described this as “a strength” that the new Congress leader has at the moment over the current Prime Minister.

“Keith ain’t going football match as Dickon did ….and them young people gravitating to him. Keith as the Minister of Youth don’t have that and he can’t do that anymore and when he pass the youth ain’t gravitating to him as they do with Dickon.

PR (Public Relations) to see how the young people swing. You see there are certain things in the politics that is PR and certain things strictly strategic and involves strategies because strategy is not PR.

“You don’t broadcast and boast your strategy but the PR with the young people, he (Dickon) should take the lead in that – he’s like Usain bolt in that now – (NDC must) take it and run but that alone is not all.

The female political strategist believes that despite the talk of being confident of another 15-0 victory at the polls coming from the NNP camp, the Prime Minister is believed to be “getting nervous” especially if there is a swing among the youth vote to Dickon Mitchell and Congress.

Prime Minister Mitchell is seeking to create history in electoral politics by winning three straight elections 15-0 against his political opponents.

Speculation is rife that the 75-year old Grenadian leader might call the poll within the next six months.