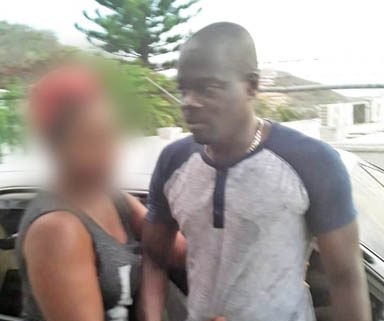 Cpl Ryan Bubb – the officer at CID who is under investigation

Superintendent of Police, Vannie Curwen has confirmed that a member of the Criminal Investigation Department (CID) is under investigation after a civilian filed a complaint that the individual pulled a gun and threatened to shoot him Monday.

The officer has been identified as Corporal Ryan Bubb and the complainant is Dominic Charles of Mt. Hartman in the south of the island.

Charles visited South St. George police station on the night of the incident to make an official complaint about the encounter which happened at around 5.15 to 5.30 p.m. close to his home near to FLOW building.

Speaking to THE NEW TODAY on Tuesday, Charles said that he was walking in the road with his two children, one aged five and the other only ten months old, who were just ahead of him when he noticed a vehicle coming at great speed in their direction.

“…I shout out to my son to hold the little one,” he said, adding, “I was like about five meters (away) from them.

Charles gave a very descriptive account of what transpired with the police officer.

He said: “With the speed which I see the car coming, I shout to him, and he (the 5 year old) jammed her (the younger one) to the side of the fence … and I had to (move) to the fence also.

“So I lift my hand in the air and I went down (towards the ground) in the motion to (slow) down the car and with the speed my hand went on the back glass of the car.

“So the driver then come to a sudden stop. He must have stopped let’s say about 15 metres away from me or more and then just come out of the car one time, cranked his firearm and pointed it at me… start threatening my life… telling me, he will shoot me. My children were right in my foot when he point the gun at me.

“He pointed at me in the presence of my five year old and ten month old children and start threatening me that he is going to shoot me and that I’m lucky that his vehicle didn’t get damaged.

“I tell him he cannot shoot me, that he cannot pull out no firearm in the presence of my two little children like that and threatening me”.

Charles alleged that Cpl. Bubb uttered some words towards him after alighting from the vehicle.

“He (Bubb) said, oh you don’t know who you’re messing with – I am the law and going on and on and saying all sorts of things and threatening.

According to Charles, several neighbours on realising that something was happening, came out and tried to assist by holding onto the police officer and trying to calm him down.

He said: “It had one young lady who knew him (Bubb) and was holding him. He continued going on… until he started threatening other people and then brandishing the firearm in the air.

The Mt. Hartman resident told THE NEW TODAY that he knew the individual to be a police officer after seeing his face when he came out of the vehicle.

Charles said that he was able to snap some photographs of the policeman with a cellphone but that the brother of his girlfriend had a confrontation with the officer.

He claimed that the police officer “boxed down” the phone of this individual.

“My brother-in law proceeded to try and get a photo of the officer and the officer then boxed down the phone with the gun and then discharged it in the direction of the people who were trying to calm the situation.

Asked if the police officer fired directly at him or in the air, Charles said: “He fired it up towards the crowd – at the people who were in the road”.

Charles said that he made a report to South St. George’s police station on Monday night and gave a statement about the incident.

According to Charles, Supt Curwen came to see them on Wednesday and took statements from his brother-in-law whose phone was thrown to the ground by the policeman and also from his sister-in-law who was also trying to calm down the CID officer.

“He told us that he will be working speedily on the investigation and to get it sent to the DPP (Director of Public Prosecutions) where they will go further into it and decide what course of action will be taken into the matter and I can always keep in contact with him.

A high-level police officer said that Bubb will not be suspended from active duties at the moment as the investigation is ongoing.

A former police chief said that a matter like this should be handled internally by the Commissioner of Police and if it warrants then dismiss the individual from the force.

“The onus is on the Commissioner of Police to do his work. He should not leave it to the court to charge him (Bubb) a fine or give him a warning. You should know as an individual in the force there are certain principles and guidelines that you must follow in the execution of your duties and excessive use of force by taking a firearm, pointing at somebody and firing it into the air warrants dismissal.

Charles also denied reports circulating Thursday in some quarters that the vehicle was not driving at speed and that he deliberately struck it as it passed alongside him and it was then that Cpl. Bubb stopped, came out of the vehicle and confronted him.