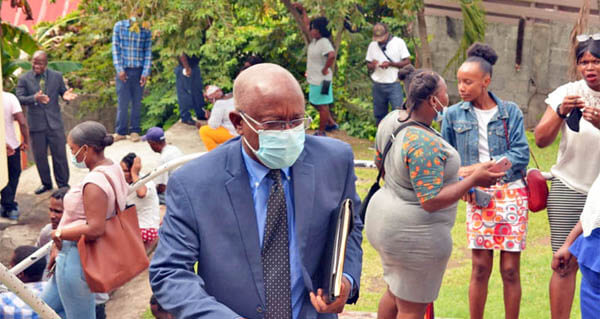 The Police prosecution department failed to seek the maximum sentence for a medical doctor and his partner who broke the laws regarding COVID-19 quarantine in Grenada which resulted in the closure of several businesses and the spread of the virus to at least one local.

Dr. Timothy Mc Kinney and Amy Baxter appeared at the St George’s No.1 Magistrate Court on Wednesday, charged under Section 81 of the Quarantine Regulations, for failing to remain at a designated place of quarantine.

The couple, represented by Grenada’s Ambassador to the OECS and Caricom, Attorney-at-law Arley Gill, pleaded guilty to the charge.

However, the Police Prosecutor handling the matter did not offer much evidence against the couple, nor did he seek to make a case for the maximum sentence allowed under the Law, when presenting the facts of the case.

The only evidence offered against the couple was that they had admitted leaving quarantine and that one other person was infected as a result.

The Prosecution failed to place on record the full extent of the aggravating factors in the case such as the fact that one of the defendants is a medical doctor who ought to know better, the extensive losses to several businesses which were forced to cease operations and the large number of people who were forced into quarantine as a result of the couple’s actions.

Instead, the Police Prosecution only spoke of the couple signing the quarantine agreements and that they visited four restaurants, as well as the beach.

The couple told the police that they received test results through unauthorised means and those results were negative – offering this as their explanation for leaving quarantine before being officially cleared.

However, this evidence was not presented to the Court as an aggravating factor in the case but rather as a mitigating factor.

The Police Prosecution told the Court that the medical doctor and his wife were of the impression they were negative as they received a text message stating so.

“They received a text saying they were negative. According to them they misconstrued (the results),” the Prosecution told the Court.

Their legal representation later told the Court that the results received through “unofficial channels” turned out to be inaccurate.

There was no attempt to place on record the serious nature of the actions of the medical doctor and the Prosecution did not offer one word on the type of sentence they thought the matter warranted.

In handing down sentence – fines of $5000 each – Acting Chief Magistrate Teddy St Louis said, “I believe that it was a genuine mistake with no malice,” adding that the problem was that the couple relied on “unofficial communication” to release themselves from quarantine.

The maximum fine is $10, 000 but because they pleaded guilty at the “earliest opportunity” and showed remorse for their actions with an apology delivered by their Attorney and no previous conviction in the Grenada criminal jurisdiction, the lesser fine was imposed.

They were ordered to pay the fine on the same day after which they would get back their confiscated travel documents.

However, there was no penalty attached if they failed to comply with the order.

Police investigators who handled the case were also observed in close and friendly interaction with Dr. Mc Kinney and Baxter in the courtroom.

The lead police investigator sat with them and they were observed exchanging communications through their mobile phones.

Director of Public Prosecutions (DPP) Christopher Nelson was also present in observer status during the trial.

Presenting his client’s defence, Ambassador Gill also told the Court that the doctor and his wife were convinced that they were not infected by the virus after receiving a text message.

According to him, the couple were anxious to attend a Film Festival benefit event on November 6 but had not received results from samples collected from them the day before, on their fourth day in quarantine which is Ministry of Health procedure for everyone in isolation.

Gill told the Court that Dr. Mc Kinney enlisted the help of a friend to secretly find out their test results from the testing laboratory and that they received a text which said negative along with an additional message that they could attend the event.

The actual text message was not presented by either side to the court.

Attorney Gill opened his arguments by saying, “My clients, through me would like to wholeheartedly apologise to the person or persons who may have been affected through their actions. More than that, Dr. Mc Kinney, a medical professional, wishes to encourage, and he is a strong advocate, for people to remain in quarantine when ordered to do so.”

In excusing his clients’ actions, Gill said the public should know that they did not run away from quarantine and that they had the blessing of health officials to depart from the airport without GPS trackers and in their own transportation.

He stated that there were no GPS trackers available at the airport at the time of their arrival.

The company providing the GPS trackers for home quarantine have since been relieved of their responsibilities of fitting people with the devices and monitoring because of a myriad of other problems with the service they provided.

The COVID-19 prevention protocols also require travellers to use designated transportation to their place of quarantine.

Even after their positive test results were available, the couple did not respond to calls from the Ministry of Health, delaying contact tracing by almost a whole day.

Ambassador Gill called the situation “a genuine error”, adding that Dr. Mc Kinney did not properly look at the date on the results which he received through back channels.

Dr. Mc Kinney, a professor of medicine, is an alumni of the St George’s University (SGU) and this fact was offered by his lawyer when asking for a “reasonable fine” to be imposed on his clients, unlike the Prosecution which made no appeal to the sitting Magistrate whatsoever regarding sentencing.

Gill offered precedence from St Vincent and the Grenadines, saying that a man who breached quarantine and claimed he did so because he had stomach problems, was charged $1500.00 while Dr. Mc Kinney is a “philanthropist” who plans to build a hospital on the Maurice Bishop Highway.

“What fine that could be charged that would be more than (the cost of) a hospital?” he asked.

THE NEW TODAY contacted the Minister for Health, Nickolas Steele on the issue of the Covid-19 results being given unofficially.

He denied that this had happened and defended the integrity of his lab technicians.

He said “these people violated us” and from the beginning they claimed that they had received a negative result so obviously they would use that in their defence.

THE NEW TODAY also contacted the police at the executive level for comment on the questionable handling of the Prosecution’s case in the Magistrate’s Court against the two Americans.

“If there was that type of cosying up to the defendants then it is definitely concerning, especially since their actions put us all in danger,” said a senior member of RGPF.