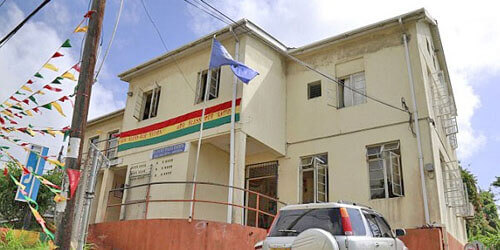 The building that houses the St. David’s Police station and the Magistrate Court

A police officer is being investigated in a Child Maintenance racket involving thousands of dollars in St. David.

Well-placed sources told THE NEW TODAY that the officer has been removed from active duty at the St. David’s Police station and transferred to another post pending the outcome of the investigation.

According to a source who did not want to be identified, the illegal act involves the execution of warrants by the police to fathers for child maintenance money owed to mothers.

He said that several mothers showed up at the St. David’s Magistrate’s Court to collect their monthly payments and were turned back on the grounds that the monies were not paid by the fathers.

He spoke of evidence emerging that the monies were paid to a particular police officer who did not surrender the funds to the St. David’s Magistrate’s Court.

THE NEW TODAY understands that an Inspector of Police attached to Grenville Police station is spearheading the investigation into the missing money.

A few months ago, a similar probe was conducted at the Magistrate’s Court in Victoria when Child Maintenance money believed to be around EC$30, 000.00 went missing.

Related:  The testimony of Beryl Isaac

The money was only discovered missing when several mothers started to complain of not getting their child maintenance allowances despite evidence that the funds were collected by the Victoria Magistrate’s Court.

The suspect involved in allegedly siphoning off the funds was described as a strong supporter of the ruling New National Party (NNP) government.

She was transferred to the St. George’s Magistrate’s Court and the matter was referred to the Public Service Commission (PSC).

This newspaper understands that a probe was conducted by the Department of Audit and a report handed in to the Commission on the missing money at Victoria.

An attorney-at-law told THE NEW TODAY that stealing by Reason of Employment is becoming very prevalent on the island and dominating the case list before sitting Magistrates.