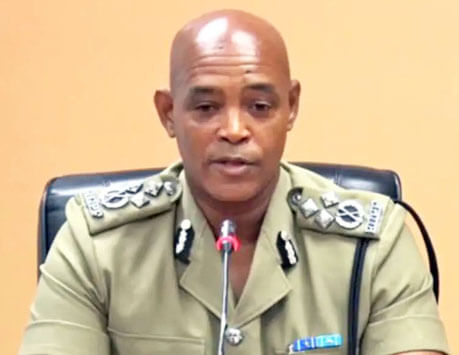 Police top brass in Grenada have not ruled out the possibility that trade union leaders could face criminal charges.

The GUT is being investigated for violating the Emergency Powers Act COVID-19 regulations which the police are alleging happened during the last three protest events staged by the Union in recent weeks.

During a press conference on Monday, held specifically for the purpose of addressing police action on Saturday against the GUT leader, Deputy Commissioner of Police, Franklyn Redhead said, “The protocols and the expectations relative to applying to the CMO (Chief Medical Officer) with respect to having that requisite permission to stage those marches, have not happened”.

There was heavy police presence and intelligence surveillance at all marches and protests of the GUT but no attempts were made to break up the actions which the police are now saying were illegal.

At Monday’s press conference, the police, while claiming that the Union protested without permission also admitted that “special accommodations” had been made to allow the activities to go on.

Asked whether criminal charges are on the way for the GUT leadership, Redhead was very vague in his response.

He said: “All we are seeking is compliance. What has happened in the past has happened. The expectation is that going forward, anyone, including GUT, who is going to stage an event have to have the requisite permission from the office of the CMO, who is responsible for granting these permissions.

“I cannot situate the outcome of any investigation because I do not know the details. Certainly the evidence will dictate that as we go forward,” he added.

Redhead said in cases like these where law breaking by a large group is alleged, the event organisers would be charged for the violations.

Head of the Community Relations Department of the Police Force, Superintendent Vannie Curwen explained that this is what has to happen because it would be troublesome to bring charges against large numbers of individuals for offences related to a single event.

Hundreds of teachers participated in an April 7th protest in the city to press their demands for the 4% increase in salaries due at the end of January.

If brought to Court for criminal breaches of the regulations, the TUC leadership could face up to 12 months jail time or fined up to $1000.00.

The Union heightened their protest Friday by taking their action to the private residence of Prime Minister Dr. Keith Mitchell in St. Mark.

Less than twenty-four hours after the march, police went to the home of GUT President, Jude Bartholomew to take him in for questioning in connection with the protest activities.

The GUT protesters had gathered outside the country home of the Prime Minister chanting and demanding that the increase be paid.

They also went to the home of Parliamentary Representative for St Mark, Dr. Clarice Modeste-Curwen to voice their displeasure of not being paid their money.

The GUT has been going around the country holding vigils to pressure the government to pay a 4% increase that is past due.

Officials of GUT believe that the police crackdown on Bartholomew was a smokescreen and an attempt to intimidate teachers, since the police is fully aware of whether or not permission had been received from police Headquarters and health authorities for the April 7 march.

During the press briefing, Deputy Commissioner Redhead sought to give public assurance that the “operational independence” of the police is intact and their move against the GUT is not being influenced by separate forces nor is it an attempt to subvert the right to protest.

One member of the GUT expressed the belief that the Prime Minister who is also Minister for National Security with direct responsibility for the police force may continue to use the lawmen to try and intimidate teachers and that there may be stronger actions taken against protestors in the future.