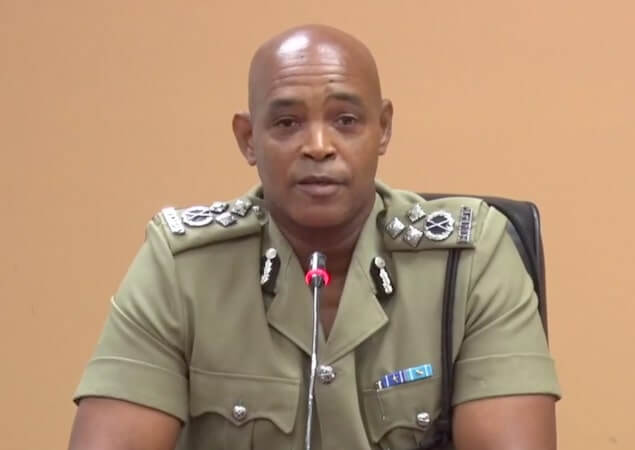 Grenada’s Deputy Commissioner of Police, Franklyn Redhead has denied claims made by U.S-trained attorney-at-law, Jerry Edwin that the police on Sunday used “a hollow-point bullet” to shoot national footballer, Jamal Charles in the upper leg.

Edwin issued a statement last night which indicated that this is the type of bullet “that is ordinarily used by military forces not by police officers” in the operation that was carried out in Gouyave, St. John.

24-year old Charles was left hospitalised from the bullet wound after a confrontation between his family members and a police party which showed up at his home in search of his elder brother.

Speaking at a press conference early Wednesday morning, Deputy Commissioner Redhead flatly denied the allegation made by Edwin who has been retained by the family to look after their interest in the matter.

“From my knowledge and certainly from the evidence that has been presented the ammunition used was a conventional warhead as is established within our protocols that is used within the RGPF operations.

“This is completely falsehood and I believe it is purely to direct or misinform the public in a particular direction”.

The Number Two man in RGPF assured local reporters that the police force will deliver on its promise to conduct “an unbiased and fair” investigation into the shooting incident and to submit the findings for the Office of the Director of Public Prosecutions (DPP) to determine the appropriate action.

He said: “At the culmination of our investigation or findings, (it) will be presented to the Office of the Director of Public Prosecutions which is an independent state authority to evaluate the veracity of what has been said or what has transpired.

“I would add that I would not further fuel the flame of the narrative that is out there in terms of looking at this issue from only a single perspective but I will wait until the results of the investigation has been completed certainly to provide clarity on this issue going forward.

“…I must also hasten to add that I would be second in line because Commissioner will be first, to challenge any police officer who has acted out of character certainly in the context of not fulfilling the obligations of being a true police professional by certainly violating the public trust by not having the requisite professional maturity to wear this badge or to be a police officer.

“…I would not under any circumstances throw any officer under the bus purely to fulfil the narrative that is circulating without rooted in evidence, without rooted in the truth and certainly this is the course of action that the RGPF has taken consistently and that is what is going to happen going forward relative to this investigation.

”We will investigate – we have promised to do so, we will do so fairly. We would send those results onto the Director of Public Prosecutions for his assessment…” he added.

According to Deputy Commissioner Redhead, the RGPF has a responsibility “to follow through in terms of its own obligations under the Statutes” with respect to the recommendations of the DPP Office on the Gouyave shooting incident.

The second in command of RGPF also responded to a question about the integrity of the findings coming from the DPP’s office since the investigation was being done by the police themselves into a shooting involving one of their own.

Redhead said: “… The DPP’s office is an independent State authority and if they are dissatisfied with what is presented to them they can do their own investigations – they can call to see certain witnesses, they can call in anyone that they wish to see to clarify issues”.

“…It’s not a done deal on the basis of the police presentation. The DPP is an independent State Authority and they can call witnesses, they can verify facts in their own right as appropriate,” he added.

The shooting of the national footballer who is considered as “a role model” in Gouyave angered several villagers who staged protest action within minutes of the incident by littering the streets with garbage and burning objects in the streets.

Family members claimed that the national footballer was not armed, was more than 6 feet away, and had nothing in his hand which posed a threat to the Corporal of Police who did the shooting.