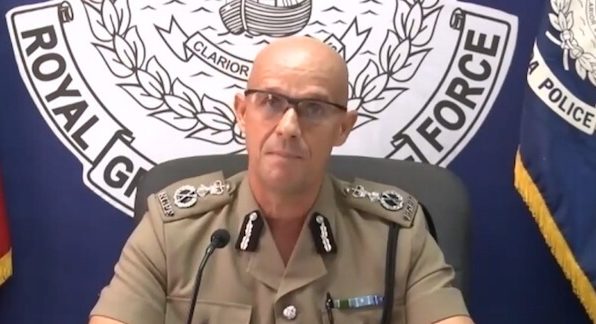 Commissioner of Police, Edvin Martin has dropped hints that his men and women in uniform could be ordered to deal more harshly with civilians.

The island’s police chief was addressing the issue at a press conference in which he referred to as “an emerging trend of recalcitrance, resistance and non-compliance” by members of the public towards the police.

COP Martin gave an example of a recent incident in the northern village of River Sallee, St Patrick where a large group of people hurled missiles at the police when officers attempted to disperse the crowd after the midnight curfew hour.

“Blatant and outright attack on the police is unacceptable,” he told reporters Wednesday, adding that the growing trend of disobeying orders by the police could push the Force to “change its posture”.

Three officers were injured in the River Sallee incident and initial responders were forced to retreat and call for back-up from paramilitary officers at the Pearl’s base in St Andrew.

Commissioner Martin said while they are not yet “at the tipping point” of public aggression towards the police and there is “good cooperation generally” from the public, the police force could adopt a more surgical approach in its handling of sections of the Grenadian community in response to the growing trend where police officers “are not respected”.

Over the last few months, there has been an increase in police officers discharging their service weapons and shooting and killing of civilians.

“So the change in posture will be, if needs be, and I don’t think we are there yet and that’s why I indicated that I am concerned about what seems to be a growing trend against police officers, and I must reiterate again that this particular action is not a norm and it is not leveraged at the majority of society.

“The police get very good cooperation generally in the execution of their duties, however there (are) a few that consistently seem to respond in a negative way to the police force.

“The police force cannot take a situation and ascribe a particular response to the mass population but we have to be surgical in that posturing when our intelligence and information suggests that a particular group of individuals require a different type of response. So the issue here is we have a situational response.”

Commissioner Martin seemed to be suggesting that if the trend continues more officers will appear armed when dealing with the public.

“I have seen before when we had a carnival, a group of people who came from Trinidad and one of the reports I see coming out was that they can’t believe police officers (were) in the middle of carnival, out on the ground at four o’clock in the morning without a firearm…..we want that to remain that way,” he remarked.

The police chief pointed out that the cases of aggression towards the police are still isolated but have the potential to attract “copy cats” and the problem can escalate.

The conduct and professionalism of members of the police force have been called into question by the public and incidents involving poor conduct by the police have appeared quite frequently on social media.

The Commissioner did not respond directly to questions about what part police conduct might be playing in the growing trend of disrespect towards the police but he did comment that the police have an effective internal investigation system.

Commissioner Martin called on the public to cooperate with the police while bringing complaints forward for investigation.

He said as an “added layer of transparency and objectivity” all complaints against members of the force are also referred to the office of the Director of Public Prosecutions (DPP) for advice.