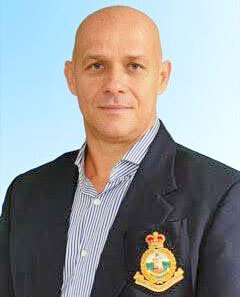 Investigators looking into the recent police shootings of two civilians – a son and his father – will not have the benefit of body cam video to aid in the investigations.

More than a month after a promised roll out of body cameras, the Royal Grenada Police Force (RGPF) has failed to meet a promised deadline to introduce the use of the devices among officers on active duty.

Acting Commissioner Edvin Martin had announced that at the end of September the Force would begin using body cameras.

On Monday, the COP said it would be a “partial rollout” because they have only a small number of cameras and a new date for the introduction of the devices has not been set.

Chris “Santa” Regis, a former national sportsman, was shot in the arm by a police officer in his home village of Fontenoy in St George’s, after he ran away from officers because he was allegedly smoking a marijuana joint.

His father, Trevor Regis, a retired fisherman was killed two weeks later on Friday last. He was shot by a police officer multiple times, on a busy city street in St George’s.

The 67 year old father was allegedly armed with a weapon and Head of the Police Community Relations Office at RGPF, Superintendent Vannie Curwen said they will be looking at video – from random people who captured the incident, a news interview given by Regis after his son was shot and possibly CCTV footage – as part of that investigation.

Acting Commissioner Martin told THE NEW TODAY that the officers involved in the Fontenoy shooting were not wearing body cameras as the devices are still on the shelf while they prepare procedures and train officers.

“It is a partial roll out. We are finished with our procedures and guidelines on how officers will use them, how we treat with it then we have to conduct training,” he said.

“We have not met that deadline. If we implement it without proper procedures then we can have problems,” he added.

Two months ago when Acting Commissioner Martin announced that body cameras were to be introduced, he said they would form part of the gear that frontline officers carry on duty and that it would be in line with international law enforcement requirements.

Currently there are no specific laws or regulations for police use of body cameras in the line of duty and the procedures for handling footage when the cameras do go into use does not include an independent body to review body cam evidence.

Earl Maitland, an activist against police misconduct and police brutality has called for such a body, saying he is concerned that left up to police investigators evidence from body cams can be tampered with.

However, Maitland said if handled properly the devices can be a useful tool to protect the public from increasing police misconduct and acts of brutality as well as to protect police officers from civilian abuse.