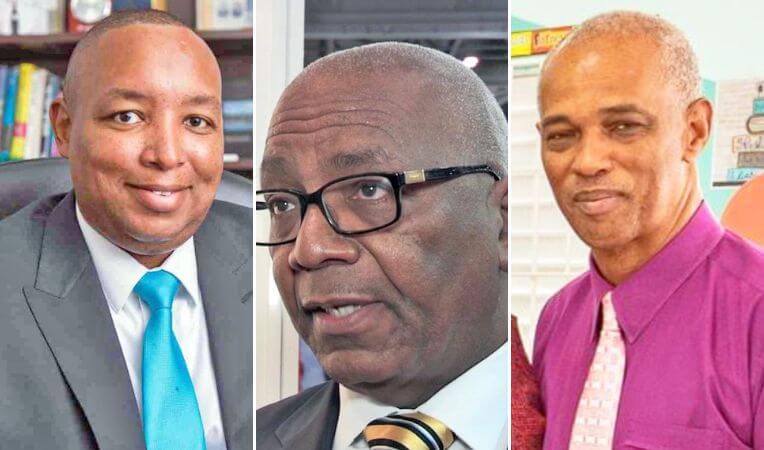 (L-R) James Pitt – the CEO of Lime has been appointed to serve on the new look board; Rodney George – questions have been asked about him; Benedict Brathwaite – the former Grenlec financial controller is now back as Chairman of the Board of Directors

A leading private sector official on the island does not see any conflict of interest with some of the persons who were appointed to serve on the board of directors of the state-controlled Grenada Electricity Company (GRENLEC) by the newly installed National Democratic Congress (NDC) government of Prime Minister Dickon Mitchell.

Concerns have been raised in some local quarters about three directors – Rodney George, who was a representative of Wartsila company that sold an electricity generating set to Grenlec, James Pitt, the Chief Executive Officer (CEO) of Lime which pays the electricity company a fee for use of its electricity poles to run its telephone lines, as well as the husband of a staff member of the utility company.

THE NEW TODAY understands that since being appointed to serve on the Grenlec board, George was asked about the issue of conflict but said that he is no longer associated with Wartsila.

According to the former President of the Grenada Chamber of Industry and Commerce (GCIC), the new persons selected to serve on the Grenlec Board would not be engaged in any conflict of interest provided they “declare your interest and ask to be recused from the discussions and once you do that then there is nothing wrong.”

He said that particularly in the case of George, as long as he recused himself “from any discussion because of his interest in Wartsila and tells them that he has an interest and cannot be a party to any of these discussions then he doesn’t conflict himself….. so that must be done.”

George is a former manager of Grenlec but was detained for a brief period without charge or trial by the 1979-83 People’s Revolutionary Government (PRG) of late Marxist leader, Maurice Bishop, as a counter-revolutionary element.

According to the private sector official, he sees George as someone who will bring a lot of “experience” to the discussions involving the members of the Grenlec Board.

“I actually think he is a good person but again they must follow the procedure and declare any interest and recuse themselves from discussions in the matter – it’s better than them yes man that they had,” he said.

This is a clear reference to the party loyalist who served on the previous Grenlec board of directors under the former New National Party (NNP) government of then Prime Minister Dr. Keith Mitchell which lost power following the June 23 general election.

The private sector official did not see Pitt’s appointment on the new electricity board as providing any conflict of interest.

He said that the deal worked out between Lime and Grenlec on use of its electricity poles is already an established arrangement and “unless something new is coming up – there is new negotiations about the use of those (poles), then to me that is a mute issue.”

“Again any discussions involving any fees, payment, concessions for the use of the poles, he should also recuse himself. As long as he (Pitt) declares – look, I have an interest in this, I can’t be party to these discussions, excuse me, let me step outside (of the meeting), when you come back in that is perfectly in order.

“But he (Pitt) must be encouraged to do that and the chairman must be firm – if he doesn’t do it the chairman must advise – I believe you have an interest and you should recuse yourself. That’s what needs to happen.”

The other board member with a question mark has been identified as the husband of a Grenlec employee who works in the finance department of the utility company.

The former GCIC president said: “I don’t know what the conflict will be there. In fact that might suit the board as he might bring some office talk, politics to the discussions. If the wife works there I am not sure that I see the conflict. He is not working there, he is not the workers’ rep or so. If his wife works there the only question that could arise is money issues but that is a bit of a stretch.”

Prime Minister Dickon Mitchell was also confronted on Wednesday by reporters on the issue of conflict of interest on the appointment of Congress’ Treasurer, Andrea St Bernard, an attorney at law, as a board member of Grenlec and Daisy Joseph-Andall as a board member for the Grenada Citizenship By Investment (CBI) Committee.

He said that St Bernard was a professional who was more than qualified to serve on the board and that in the case of Joseph-Andall, although she is associated with the Warren Newfield-promoted hotel project in the south of the island, the business is not at this stage involved in the passport selling business.

Another leading private sector official who supported Congress in the just-ended general election gave support to the newly appointed members of the Grenlec Board.

He said, “these individuals have the capacity to make a meaningful contribution to the further development of Grenlec. It only becomes a conflict of interest if you sit in on a meeting where matters pertaining to an interest you may have is being discussed. Once you excuse yourself from the meeting when the discussion is taking place, then there is no conflict of interest. Grenlec issues are extremely serious at this point, so the best experienced minds are needed. Grenlec issues are much more than pole sharing and buying engines – these are not every day issues.”

The cash-strapped Grenlec is about to seek approval from the new board of directors to borrow close to EC$15 million to pay salary increases to its 160 workers and for fringe benefits due to a pre-election deal entered into by the Mitchell-led government with striking employees belonging to the Technical & Allied Workers Union (TAWU).