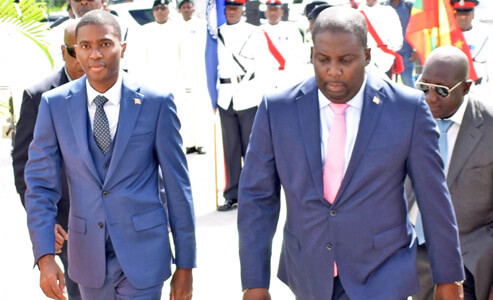 Prime Minister Dickon Mitchell has outlined his government’s plans to tackle, and reduce the country’s billion dollar public debt, which stood at $2.1 billion (66.2%) of the Gross Domestic Product (GDP) at the end of June 2022.

The newly installed Grenadian leader, who is also the Minister of Finance, commented on the debt inherited by his National Democratic Congress (NDC) administration which took office in June, during a live interview with the Government Information Service (GIS) on Wednesday.

The Prime Minister was speaking shortly after making his debut appearance in Parliament, where he took the oath of allegiance, during a sitting to mark the opening of the first session of the Eleventh Parliament, at Mt. Wheldale, St George’s.

PM Dickon Mitchell spoke of plans to implement strategic measures to reduce or cease borrowing unless necessary, and to grow the economy, through investments in areas and sectors that can spur economic growth.

In delivering the Throne Speech, Governor-General Dame Cecile La Grenade, who revealed the billion dollar debt to GDB ratio, spoke of the government’s plans to pursue a path of prudent fiscal management to preserve credibility and safeguard medium-term fiscal and debt sustainability, while cushioning the impact of a harsh macroeconomic environment on citizens, especially the most vulnerable.

Placing on record his government’s commitment to debt reduction, the Prime Minister noted that “one of the single goals of the International Monetary Fund (IMF) supported, Structural Adjustment Programme (SAP) that was undertaken to restructure the country’s debt under the former Keith Mitchell-led administration “was to reduce our debt to GDP ratio, which is a commitment that remains and continues.”

PM Mitchell indicated that his government’s intention is to remain compliant with the Fiscal Responsibility Act (FRA), which he acknowledged that “the effect of this will be to continue driving down our debt to GDP ratio.”

He also spoke of plans to reverse the suspension of the Escape Clause which was approved by Parliament under the former Keith Mitchell regime, as a measure to mitigate the economic fall-out caused by the COVID-19 pandemic.

The former administration “would have suspended the (the Escape Clause) Fiscal Responsibility Act, which placed certain limitations on our ability to borrow as well as our ability to spend” and PM Dickon Mitchell disclosed that his government will be “going back to the Fiscal Responsibility Act because the circumstances for the suspension no longer exists – there is no longer a state of emergency.”

Related:  Chester Humphrey speaks on dismissal of workers in Carriacou

The Prime Minister explained that while this will handicap his government’s ability to do more in terms of capital spending, the fact is that “the only way to get out of this situation is to in fact grow the economy.”

“The challenge we face now is that for every dollar we spend, 30 or 40 cents goes towards debt repayment, and we have to continue that until we get to a point where we have significantly less debt.

“So, the commitment to pay down our debt remains, to not borrow unless you absolutely have to, and that if you do borrow is to ensure that it’s particularly for the productive sectors and sectors that can in turn grow the economy.”

The new Grenadian leader also identified food security, healthcare, and skills development in youth as areas high on the agenda of Congress.

“We have to look at things like food security because clearly we have seen with COVID-19, if we keep importing food, and there are transportational challenges (and) it means we would not find food on our shelves and so we need to make sure that from at least feeding ourselves point of view that more food comes from the island so that we can get it,” he said.

In the Throne Speech, which is normally prepared by the sitting administration and read out by the Governor-General, it said that “based on data collected for the first six (6) months of this year, our economy is expected to register positive growth for 2022, and 2023, though the projection for 2023 is for weak growth given the global economic outlook.

The government’s fiscal position is projected to improve in 2023, and over the medium term, while the underlying objective for the medium-term fiscal strategy is to support its transformational agenda, while simultaneously safeguarding fiscal credibility and sustainability.

The fiscal forecasts are subject to review and revision prior to the Budget presentation later in the year, given the prevailing and potentially grave macroeconomic uncertainties.