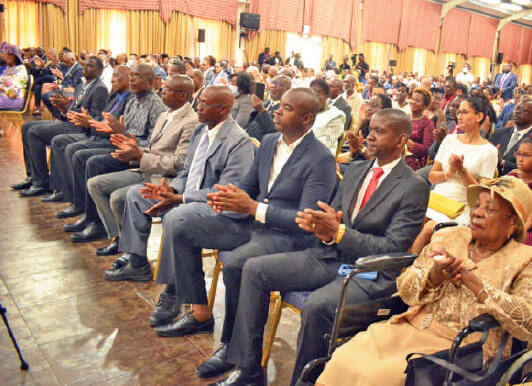 Some candidates of the NDC at Friday afternoon swearing of their leader, Dickon Mitchell as the new Prime Minister of Grenada

Grenada’s newly elected Prime Minister, Dickon Mitchell has sent out a clear message to public sector employees that the new catch phrase under the rule of his National Democratic Congress (NDC) administration will be “merit” in determining who will hold onto their job placements.

His message is seen as a warning to those unqualified political hacks given certain jobs with government on the basis of loyalty to the former New National Party (NNP) government of Dr. Keith Mitchell who lost power Thursday in general elections on the island.

Speaking minutes after being sworn in as the small island’s 9th Prime Minister, Dickon Mitchell attacked the former regime for handing out jobs in the government service primarily on one’s association with the then ruling party.

He announced that some changes will be made among workers at the governmental level but did not elaborate.

“We would seek to do so in a transparent and open manner – the key criteria will be merit in particular as it relates to the Government service in all aspects including the police, nurses, teachers and doctors.

We need to run our country based on merit, hard work, the desire and willingness to overcome and to find solutions to the challenges that face us. We will not move forward or prosper as a people on the sole basis for job selection, promotion, for the award of contracts on party loyalty or personal loyalty.

If we continue with this approach we will be doing ourselves and several generations of Grenadians to come a huge disfavour and so under my leadership I intend to break that vicious cycle of nepotism.”

Prime Minister Dickon Mitchell disclosed that the incoming administration has to perform several tasks in the coming days including the appointment of the Cabinet of Ministers.

He later told THE NEW TODAY that he was looking at several persons to perform the job of Attorney General and a decision could be made by Monday.

According to Dickon Mitchell, the “boxing match” on Thursday between himself and former PM Keith Mitchell and NDC and NNP candidates is now over and the task ahead is for the new rulers “to govern on behalf of the citizens of Petite Martinique, Carriacou and Grenada.”

“I wish to assure the nation that under my leadership the National Democratic Congress must lead by example, by taking a united citizenship first approach to our governance,” he said.

PM Dickon Mitchell indicated that he is prepared to make difficult and tough decisions in government but will always seek to “explain, consult and justify to our people why we are making those decisions.”

He called on nationals who in the past shied away from service to the nation in terms of accepting appointments on boards and statutory bodies and government entities that “the doors are open, you are welcome.”

He said the government will need to look for “fresh, new faces to serve on state bodies” like NAWASA, Gravel & Concrete, MNIB and the others.

The new Prime Minister also used the occasion to inform the nation that he had concerns with the operations of the Parliamentary Electoral Office under Elvis Morain and intended to make some fundamental changes to it.

He said: “I will not be a hypocrite by suggesting that I was always happy with the Parliamentary Elections Office or for that matter the Office of the Supervisor of Elections over some of the challenges we face.

We believe that we need to significantly strengthen our electoral process, it is in dire need of reform. It has to function to serve the people – it has to be service-oriented, it has to be efficient and it has to be a system that encourages our citizens to vote rather than discourage them.

It is certainly one of the main issues that we will seek to immediately address so that we can ensure our democracy is strengthened for generations of Grenadians to come.”

Dickon Mitchell who only landed the top job in Congress as Political Leader at the end of October described his leading the party to victory over the once powerful NNP as “nothing short of a miracle”.

He said that democracy in Grenada is not only strong but is also alive and proves that “the power rests with the people.”

“The people will always make the ultimate decision,” he remarked.

The people of Grenada, he said, are the ones who determine who gets into office and when it is time for a leader to leave office.

Speculation is rife that this shot was aimed at the aging 75-year old Dr. Mitchell who came in for criticisms in the just-ended election campaign as too old for the job and needed “to go home and take a rest.”

Dickon Mitchell assured Grenadians that the same energy and resolve that he brought to his profession as an attorney-at-law would be put at the disposal of “all the citizens” in his effort to look after their affairs as the elected leader of the country.

Friday was declared a public holiday on the island by the new Prime Minister in recognition of the victory by Congress at the polls.

He thanked the people of  Grenada, Carriacou and Petite Martinique for turning out on Election Day and giving him and Congress the opportunity to form the government to run the affairs of the island.