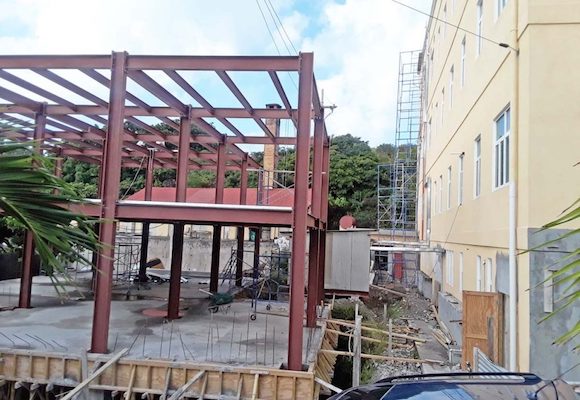 The oxygen generating facility at the St. George’s General Hospital will undergo a complete upgrade within the New Year, according to Health Minister Nickolas Steele.

Speaking at the weekly post-Cabinet press briefing, the minister gave the assurance that this will be done amidst the challenges being experienced with oxygen production at the hospital in an effort to meet the expected demand that would come once the second phase of the hospital is operational.

The oxygen plant which was down for nearly two years went back into production with the help of technicians from the visiting United States Navy Ship (USNS) Comfort which visited the island in September offering free health services to Grenadians.

The hospital was forced to rely on tri-weekly shipments of bottled oxygen from Trinidad in order to meet the demands. Minister Steele told reporters that although government has “received information” which would lead it to go out and “bid for a new oxygen generating plant,” which “is necessary” at the hospital, based on the additional demand arising from the completion of Phase two of the hospital project” the decision was taken that “rather than just purchase a facility that will deal with phase II (of the hospital project) to look at a complete upgrade of the entire oxygen generating system.”

“As you know we have been plagued with the current oxygen generating system being of and on in terms of being working and not working (and) I expect to send RFPs within this month and look at beginning that procurement process in January,” he said.

An RFP is a document that solicits proposals, often made through a bidding process by an agency or company interested in procurement of a commodity, service or valuable asset to potential suppliers to submit business proposals.

Minister Steele also announced that an upgrade to the elevator services at the hospital is also on the agenda for the New Year.

He said: “We did receive clearance in the 2020 budget from Cabinet to replace the elevators in the current General Hospital and there are only two or three suppliers of elevators within the region. So, we will be sending out RFPs for that estimated cost.

“…Our budgeted cost is $1.5 m and I am hoping that that (the estimate cost) comes in below that, so that we can use those savings but I will give you further updates as we proceed with that process,” he added.

The health minister also provided the press briefing session with an update of the progress made with the construction of the nearby second phase of the hospital.

According to Minister Steele, the “second and third floors of the building should be ready for occupation by the end of January.”

“We have been meeting with the contractor weekly to make sure that we stay on schedule…we are looking forward to moving labs in and in particular, to moving Accident and Emergency department across (to the new facility),’ he said.

“The permanent electricity connection has been facilitated to allow the testing of the major systems (such as) the elevator, air condition et cetera…but it is still a construction site so to speak (and) there are some works outside of the actual phase two building that needs to be completed for that building to be fully operational”, he added.

The minister cited the connecting corridor as one of the outstanding issues and the relocated kitchen.

“There are some significant numbers of equipment that have been ordered and others to be ordered to facilitate the move over,” he added.

Minister Steele promised to engage the Director of Hospital Services and the contractor of the project to allow the media to tour the facility “to see the progress for yourself.”