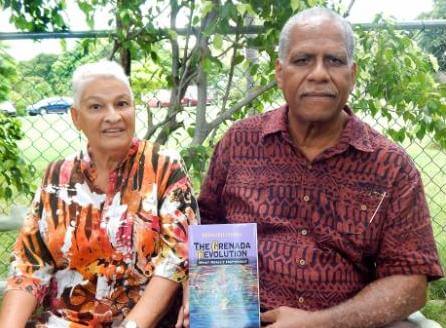 73-year old Phyllis Coard, the lone woman who was convicted for the 1983 murder of Marxist Prime Minister Maurice Bishop, died a few hours ago in Jamaica.

Mrs. Coard is the wife of former Deputy Prime Minister Bernard Coard who was often fingered as the mastermind of the bloody army coup in which Bishop was killed amidst a power struggle within the then ruling New Jewel movement (NJM) which created the 1979-83 ill-fated Grenada Revolution.

She and her husband and several government and army officials were rounded up by U.S and Caribbean troops that stormed the island on October 25, 1983 – six days after Bishop was executed at Fort George along with three ministers – Unison Whiteman, Norris Bain and Jacqueline Creft.

A close friend of the family told THE NEW TODAY that Phyllis Coard had been ailing for a number of years and virtually spent the last few months in and out of hospital suffering from medical complications.

The source quoted a daughter of Mrs. Coard as saying that her mother died at a hospital in Kingston.

The medical doctor who was looking after Phyllis reportedly told the daughter that she was without pulse when they got to her.

“She was not breathing when they got to her.  (They) tried to revive her (but it was) unsuccessful,” the daughter was quoted as saying.

According to the family member, Phyllis’ passing has shattered her husband, Bernard Coard who had been taking care of her personally over the years.

The Jamaican-born Phyllis Coard was a member of the major decision-making body of the NJM known as the Central Committee (CC) and also served as the Deputy Minister of Information in the People’s Revolutionary Government (PRG).

She was also the President of the powerful National Women’s Organisation (NWO) which was an arm of the NJM.

During the Maurice Bishop murder trial, state prosecutors were able to convince the jury panel that it was the CC that took the decision to carry out the executions.

A key witness that provided the evidence for the prosecution, headed by late Trinidad & Tobago, QC, Karl Hudson-Phillip was Cletus St. Paul, the former chief bodyguard to Prime Minister Bishop who was arrested by members of the security forces who were then loyal to Coard.

St Paul who is now facing a number of sexually related offences is now a key member of the security detail around current Prime Minister Mitchell.

His key evidence was that the CC members held a meeting on Fort Frederick, which is overlooking Fort George, and voted overwhelmingly for the execution after Bishop was recaptured within hours of supporters storming his official residence at Mt Wheldale and freed him from house arrest.

Phyllis Coard was released from prison in 2000 on compassionate grounds by the New National Party (NNP) government of Prime Minister Dr. Keith Mitchell to allow her to receive medical treatment abroad.

The Mitchell government had assured the nation that Mrs. Coard will be returning to Grenada after she received the medical treatment but this never happened.

The late Phyllis Coard came from a wealthy Jamaican family and was known to be heir to the Tia Maria coffee liqueur brand.