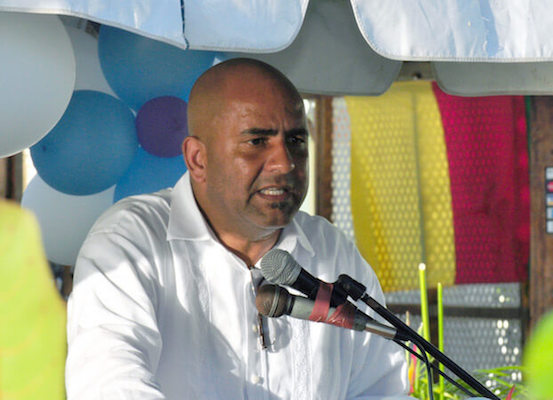 Foreign Affairs Minister Peter David was the biggest casualty in Sunday night’s reshuffle of the Cabinet of Ministers as announced by Prime Minister Dr. Keith Mitchell in a national radio and television address to the nation.

The Prime Minister told Grenadians that David, who was one of the top leaders in the Congress party until he was expelled in 2012, will now become the island’s new Minister of Agriculture, a sector that has been on the decline in the last two decades.

Minister David, a lawyer by profession, who is widely considered a controversial figure, is not known to have any link or experience in Agriculture.

In what is considered as a major reshuffle, Prime Minister Mitchell gave the prestigious post of Minister of Foreign Affairs to Member of Parliament for St. David, Oliver Joseph who has International Business and Caricom Affairs as his other two portfolios.

The Grenadian leader described the changes in ministerial portfolios as one aimed at giving “more effectiveness to the management of this government”.

MP for St. Andrew South-west Yolande Bain-Horsford who held the post of Minister of Agriculture is being assigned the position of Minister of Sports, Culture & The Arts, Co-operatives and Fisheries.

The 74-year old ageing Prime Minister made the bold move by taking on the key Youth portfolio in an apparent effort to try and quell growing unrest in the country by youngsters against his ruling New National Party (NNP) administration since the coronavirus pandemic in March which resulted in job losses and lay-offs.

Prior to Covid-19, Grenada had a 50% unemployment rate among the youth.

According to Prime Minister Mitchell, the former Minister of Youth, Kate Lewis, the Member of Parliament for the rural St. Andrew North-east constituency will now become a Minister in the Office of the Prime Minister with responsibility for Youth Development.

Two weeks ago a member of the youth arm of the ruling party told the Prime Minister at a session involving young people that there is a disconnect between NNP and the nation’s youth who have lost faith in the Imani flagship programme which was set up to address youth unemployment across the island.

Dr. Mitchell has relinquished the post of Minister of Finance and handed it over to his second in command the ageing but trusted Minister of Public Utilities, Gregory Bowen.

Prime Minister Mitchell told Grenadians that the changes made to the Cabinet is aimed at “facilitating personal growth and development and allowing ministers to become more versatile by managing different portfolios and most importantly, enabling government to become more efficient in handling the affairs of the State.”

“…The portfolio changes are intended to give my cabinet colleagues an opportunity to broaden their experience to bring a new outlook to another area of government service,” he said.

“This cabinet reshuffle entails a mix of changes in addition to reassigning ministers to different ministries portfolios. In some instances I have separated the portfolios included in some ministerial assignments and placed them with others,” he added.

Dr. Mitchell went on”… Some ministers will have additional responsibilities and or new areas of responsibilities. This cabinet reshuffle will enable our performance by allowing us to build on the progress made and to solidify our achievements to date while creating a springboard for future development.

“These changes are being made with a clear understanding that we are living in Covid-19 period and, as such, they are expected to enhance our successful control of the virus. Therefore, the change being announced now will enhance our ability to ensure the continued protection of our beloved country and its people,” he said.

Following is the newlook Cabinet which will take effect from the first week of October:-

Sen. Simon Stiell – Minister in the Ministry of Civil Aviation with specific responsibility for Climate Resilience and The Environment

Sen. Winston Garraway – Minister of State in the Office of the Prime Minister with Special Responsibility for Disaster Preparedness