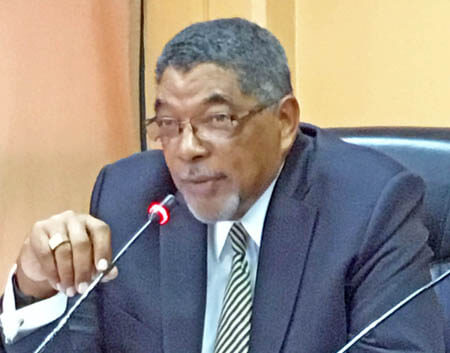 Retired banker Percival Clouden has denied reports of a rift between himself and Prime Minister Dr. Keith Mitchell which led him to tender his resignation as head of Grenada’s controversial passport-selling scheme known as Citizenship by Investment (CBI).

“No, that’s not true,” was the response given to THE NEW TODAY by Clouden on reports of difference between the two of them in the running of the CBI operation.

“There is no disagreement, absolutely – I am telling you what the truth is,” he said, also adding, “I will tell you that we are very cordial so don’t be misguided – very cordial relationship.”

According to Clouden, he decided to call it a day in order to travel abroad to take care of an issue with his health.

“It’s just that I have to take off for a lengthy period to take care of my health and I know the importance of this institution to the people of Grenada, Carriacou & Petite Martinique and I don’t want to be out and things not happening so I opted to resign,” he said.

The former CBI chief indicated that his resignation was not sudden and that he had given the required 30 day notice since January about his intention to resign from the position.

Clouden disclosed that he spoke with Prime Minister Mitchell up to two weeks ago when the Grenadian leader invited him for a personal audience even after he informed him that he was quitting the job.

He said: “There is no hard feelings at all and he (PM Mitchell) even called me back and say, come let us sit down and talk. Last week Friday I went up and met with him. We had a nice conversation – I gave him some tips on what needs to be focused on here and he heard me.

“I even went outside of that – (I showed him) other industries that we can broaden the tax base and so on. The relationship is very cordial. We will have a next sitting again when I return – he said when you come back let’s sit down,” he added.

Clouden also pointed at the interaction he had with PM Mitchell at a recent high level meeting of the CBI body.

“I went to the Management meeting – we conversed – we’re very cordial,” he said.

The former CEO of CBI whose resignation took effect last Friday recalled the close personal relationship between himself and Prime Minister Mitchell since schoolboy days at the Presentation Brother’s College.

Clouden said: “He has been my friend for over 50 years. We played cricket together for a number of years (and) he captained the team, I was his pace bowler. We are not just friends or associates (in) a work relationship. We (have) gone back more than 50 years since I was 14, 15. We went to Presentation (Brothers College) together – he was in a higher form but friends on the cricket field and in other areas”.

THE NEW TODAY understands that government has appointed a Deputy CEO in the person of Carleen Purcell to replace Clouden at the CBI office.

Although Clouden has denied the existence of a problem with PM Mitchell, other sources told THE NEW TODAY that the former CBI CEO was not happy with the manner in which some decisions taken by the Board of Directors of the passport scheme were being overturned with no consultation.

Fingers are pointing at a particular Board member who is known to have a close relationship with Prime Minister Mitchell.