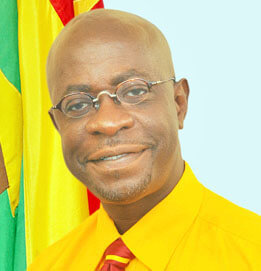 Two of Grenada’s main opposition figures have expressed alarm at the threat made by former Political Leader of the National Democratic Congress (NDC), Nazim Burke to take legal action against THE NEW TODAY in connection with last weekend’s front page article.

The two called journalist, George Worme after Burke gave the newspaper a broadside in an appearance Monday morning on “To The Point Programme” on the Grenada Broadcasting Network (GBN).

”In my judgment and in my mind and listening to people – people were not seeing it as you trying to malign Burke. People were more going behind Keith Mitchell,” said one top opposition activist.

“I think he (Burke) missed the whole point. People were talking to me and they couldn’t believe Keith had that kind of attitude to continue to go after people all these years. But in his take (Monday), he (Burke) called you almost the scum of the earth to write this article about him,” he added.

The article exposed a criminal investigation that PM Mitchell had secretly ordered the Financial Intelligence Unit (FIU) to do against the former Finance Minister in connection with state funds associated with a scholarship that was awarded to his son as an Island Scholar.

The Mitchell-led regime approached the Canadian government to try and dig up dirt on Burke as part of the investigation.

According to the opposition politician, the former Finance Minister got from THE NEW TODAY an article that in political terms afforded him “a six out of the park” to help him politically but he apparently dropped the ball.

He spoke of Burke losing a golden opportunity to go after Mitchell in a serious way for being politically spiteful because “that is what he had to do but he went behind you (Worme) instead”.

“It seems like the man is almost talking about taking legal action against you because you malign him and his character and his practice and he needs to make a daily bread.

“I don’t know – he came across so angry and so upset – I was shocked at his demeanour and his take on it. He totally missed the point and now that he missed the point people will not again look at the article for the other side of it as they did before.

“I think the guys missed it and they will continue to miss it – you see why I cannot really deal with them – all of them are the same dam thing – they don’t know anything about politics in Grenada, politics in general”.

According to the opposition figure, he has come to the conclusion that Burke and the other top leaders in Congress are not behaving as politicians.

The time out (of office) did not do anything for them – “I am sorry,” he remarked.

Another opposition figure who is leading the charge against NNP in office, expressed surprise at Burke’s outburst against THE NEW TODAY article on his GBN presentation and said that after listening to him on the programme, he was shocked at the way he was coming after the writer of the article.

He said: “I don’t understand. What did you accuse him of? Apology for what? What did you say wrong? So is he siding with the NNP that it (the investigation) didn’t happen? What part of the article was malicious?

“I believe that the article is in his favour. I was wondering if he read the same article that I read. What’s wrong with him – I am wondering why he is barking that way?

The opposition figure pointed out that no one except the FIU and Prime Minister Mitchell will have the precise information on whether the investigation that was launched is still on or reached an end.

“You don’t have that information – you are not the FIU. Only FIU can say that. How could you say it’s over? Did you start it?

THE NEW TODAY can confirm that letters were sent to us Wednesday night via email by a female attorney-at-law acting on behalf of Burke.