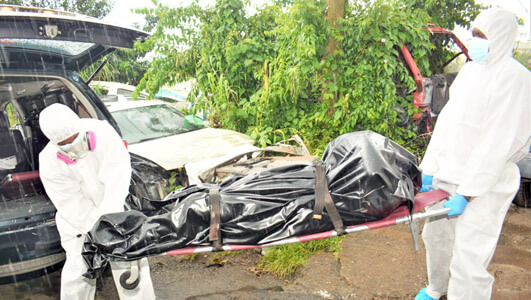 Law enforcement officers are investigating the circumstances surrounding the discovery of a partially decomposed body of a man inside a house at Mardi Gras, St. George just after 9 a.m. on Tuesday.

A 60-year-old man identified as Matthew Harry was found lying on his bed dead after residents reported a stench emanating from the house, where he lived alone in the ‘lower Madigras’ area.

THE NEW TODAY visited the area on Tuesday but was unable to get a view of the house where the deceased lived in a bushy area which was cordoned off by police investigators.

Speaking with reporters, one villager Ryan Smith, called the deceased his stepfather, and the father of his two (2) younger siblings, one of whom was on the scene but was too distraught to speak with members of the media.

Smith, who said that the last time he saw Harry alive was last week Thursday and that his death came approximately one-week after he had suffered a stroke, and was prescribed medication by a doctor.

“He told me he was on a pill and (that) the pill (was) making him feel really sick, causing him to shake a lot. That was last week Thursday, and that was the last time I saw him…apparently he died in the house days now, and nobody didn’t know,” he added.

According to the villager, he was tending to his horses when he received the shocking news of Harry’s death.

Head of the Central Police Station, Assistant Superintendent of Police (ASP) Desmond Richards, who was among the team of officers who visited the scene, said that based on preliminary observations of the body, it seems to indicate that the 60-year-old may have died from “natural” causes.

“…The other entities that (are) expected to investigate came – the photographs were taken, the doctor was called in to pronounce the body dead and so, the investigation continues from here,” said the high ranking police officer, who confirmed that “a post mortem has already been ordered by the coroner” to determine the cause of death.

Harry’s body was removed from the scene under rainy circumstances by Bailey’s Funeral Home.