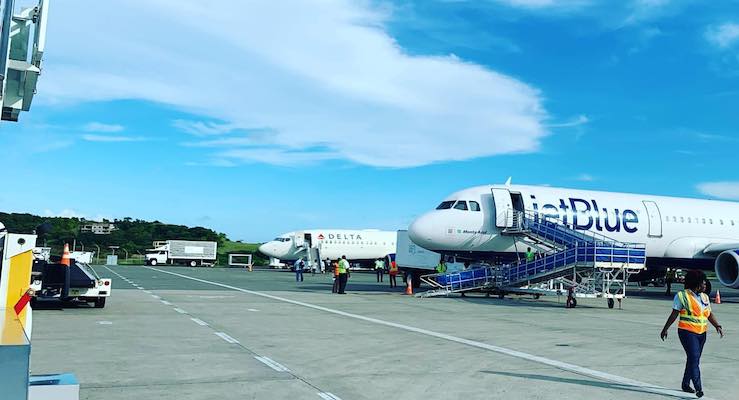 Over 150 workers at the Maurice Bishop International Airport (MBIA) at Point Salines will be laid off at month end for the next three months due to the coronavirus that has crippled many businesses in Grenada.

The workers are attached to Aviation Services of Grenada (ASG) which provides handling services for most of the airlines operating at the airport located in the south of the island.

According to a well-place source, the workers who are represented by the Bank & General Workers Union (BGWU), received letters this week from Management informing them that they will be sent home for the next three months without no mention being made of their salaries.

An official of the union told THE NEW TODAY that ASG is offering to pay the workers for only 20 days of the holidays due to them.

The company which hires most of the workers at the airport has been short of cash following the closure of the airport in March due to the deadly virus.

Most of Grenada’s COVID-19 cases came through the airport on airlines that brought passengers from the United Kingdom and the United States.

The official said that BGWU is currently holding talks with Management to look at a number of possibilities in order to honour the financial commitments owed to the workers.

He stated that the union wants to ensure that the workers get their 100% salaries at the end of the month as many of them have financial commitments including mortgage payments and others loans with financial institutions.

The union official said that one of the options put on the table is for ASG to engage in discussions with local banks and other financial institutions to impress upon them the need to give the ASG employee a waiver on loan payments over the next three months.

He also said that the union is interested in finding out if its membership will be included in the Stimulus package that the Keith Mitchell-led government has promised to give persons working in the tourism sector.

According to the official, the “door” has not been closed in talks with ASG Management since many options are right now being put before its Management for consideration on behalf of the employees.

BGWU President Justin Campbell told THE NEW TODAY that ASG Manager Leslie Scott assured him on Thursday that the workers will get something from government’s financial stimulus package but could not give him an idea of the sum of money involved.

Campbell said that he would be contacting Scott on Monday to get the specifics and if nothing concrete is forthcoming from ASG then “we know what to do”.

The parent company of ASG is the Grenada Airports Authority (GAA) which is the statutory body responsible for running the island’s sole airport that was started by the 1979-83 People’s Revolutionary Government (PRG) of executed Prime Minister Maurice Bishop.