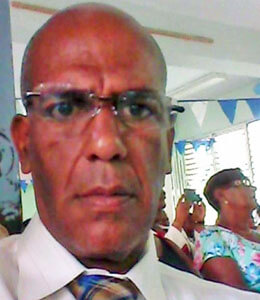 Sen. Joseph – made a significant contribution during a sitting of the Upper House of Parliament last week Tuesday

While the St. George’s University (SGU) has increased its scholarship offering to the Government of Grenada, and has agreed to assist with efforts to ensure that students who are allowed to go on residency return to contribute to national development, the need has been cited for a plan to be also developed to ensure that these new degree holders can find employment upon their return to the country.

That’s the view of opposition Senator Matthew Joseph during last week Tuesday’s sitting of the Upper House of Parliament, as he contributed to a resolution that sought to make several amendments to SGU/Government of Grenada Charter, which was last revised in 2014.

“Right now in this country, there are a number of folks walking around with degrees, and can’t find employment. We need as a country, and as a government, to establish a plan. You know in 7 years time, SGU would be reproducing 22 new doctors, let us look at our needs and do a needs analysis to see exactly where we are going to put them,” he told fellow legislators.

In the 2014 Charter, the Government of Grenada agreed to grant concession facilities to SGU in exchange for scholarships opportunities for Grenadians.

Under the new agreement, the St. George’s University Limited Order, 2022, which was approved during sittings of both Houses of Parliament last week, the 48 year-old university has agreed to increase the number of medical scholarships to be provided annually from 15 to 22, the number of undergraduate scholarships from 60 to 100, and 5 premiered scholarships.

In addition, SGU is offering 2 Masters in Public Health, 2 Masters in Business Administration, 2 Masters in International Business, and 1 Veterinary scholarship, among other benefits to Grenada.

Noting the increase in SGU scholarships Sen. Joseph re-emphasised his concern highlighting a situation “some years ago, where some young people went to Cuba on nursing scholarships and when they came back to serve, they were told there are no jobs for them (and) some of them ended up on contracts in Trinidad.

“The Cubans gave us scholarships based on what we said we needed (at the time),” he pointed out, while stressing the need “to devise and develop a plan for our students, especially those on a government scholarship.”

“We want them to go, and then come back to end up being frustrated, and so on? We must work with a plan” the Opposition Senator contended.

The Leader of Government Business in the Upper House, Senator Simon Stiell, responded by acknowledging the relevance of the concern.

However, Sen. Stiell argued that “this does not take away for a moment the significant achievements that have been made in terms of creating those educational opportunities.”

“Work is going on to align the flow of graduating students with the opening of quality job opportunities…there are gaps within that but that does not (and) should not stop us from affording as many young men, and women here in Grenada, Carriacou and Petite Martinique, the opportunity of accessing high-value world-class educational institutions.” he said.

During the debate on the St. George’s University Limited Order, 2022 in the Lower House, Education Minister Emmalin Pierre disclosed that the university has recently expressed concern over the longstanding issue, and announced that “they (SGU) are going to work closer with the government to ensure that our students come back to serve, because they understand that we cannot just be having medical doctors trained here and exporting them abroad.”

“No student receiving a medical scholarship is going to get the opportunity to start at SGU without signing their bond anymore. So, you refuse to do it with the Ministry of Education, SGU is saying we are very supportive of what happens here, and we are not going to accept that student,” she said.

The senior government minister expressed the view that it is the “moral responsibility” of those who benefit from the “over EC$600, 000.00” scholarships to give back to the country.

“You must give back something. I believe that it is a moral responsibility that every student has, to come, and want to give something back to their country,” the Education Minister declared.