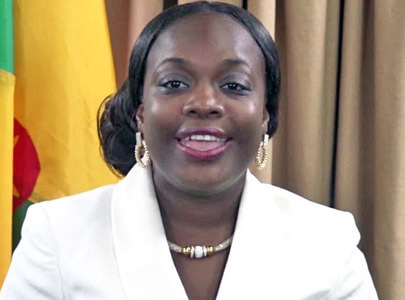 Members on the Opposition side of the Lower House of Parliament have challenged the legality of the move by the newly installed Congress government of Prime Minister Dickon Mitchell, to use a supplementary appropriation budget to establish its new Ministry of Mobilisation, Implementation, and Transformation.

The charge against the government was led by the newly re-elected Member of Parliament for the rural constituency of St. Andrew North East, Kate Lewis-Peters who said that supplementary appropriations are made to increase allocation for expenses that were not budgeted for but already existed as she raised the issue during last week Thursday’s sitting of Parliament.

The opposition MP was contributing to the debate for the $194, 702, 991.00 Supplementary Appropriation Bill that was presented for approval by the newly elected Prime Minister Dickon Mitchell who is also the Minister of Finance, during the first sitting of the Lower House of Parliament at Mt. Wheldale.

Lewis-Peters contended that “while the law provides for supplementary appropriations to be made to increase allocations for expenses that were not budgeted for, we have to make sure we do so within the confines of the law.”

“As the name suggests supplementary means to add to something that already exists, and I, therefore, want to encourage the new government to pay close attention to sections 23 to 30 of the Public Finance Management Act. This will assess the legality of creating a new ministry using a supplementary budget, especially for something that never existed,” the Opposition MP said.

Additionally, Lewis-Peters, who is currently serving a second consecutive term as an MP said, “the supplemental information produced using the new Vote 27 for this new ministry does not provide enough details as to what is expected to be appropriated before the House.”

“So, therefore to avoid any legal challenges or complications we encourage that this is evaluated,” she added.

The Opposition MP’s argument was supported, by MP for the Constituency of St. Mark, Dr. Clarice Modeste-Curwen, who noted that the new Supplementary Appropriation Bill represents a $77 million increase in recurrent expenditure, and that “a good portion of it is for our new ministry…”

She stressed that this is in addition to the $117 million in additional capital spending, compared to the $1, 352, 210, 635.00 that was previously put forward by the former government and approved by both Houses of Parliament late last year to cover the country’s expenditure for this year.

Dr. Modeste-Curwen spoke of the midterm document showing anticipated savings in recurrent expenditure “in excess of over $29m,” in areas under “goods and services, (and) interest payments” among others.

“But, what I do not see is a prudent management of that saving, where is it going to be utilised and it seems to me maybe we need to have another look at it again…because out of those areas where there may be savings…it may be that we might be looking at more like a need for $48 million rather than $77 million…” said the longstanding MP.

Prime Minister Dickon Mitchell has identified the Ministry of Mobilisation, Implementation, and Transformation headed by Member of Parliament for South St. George, Andy Williams, which is tasked with the responsibility of ensuring that all the other ministries deliver on behalf of the people of Petite Martinique, Carriacou & Grenada, as key to the success of his administration.

He said that the largest single aggregate of estimates under the Supplementary Appropriation Bill falls under the Ministry of Infrastructure, Physical Development, Public Utilities, Civil Aviation, and Transportation, totaling in excess of $80 million, while the payment of the retroactive aspect of pensions, which is estimated at $60 million is the second largest single aggregate item.

An additional $20 million has been allocated for the Public Sector Investment Programme (PSIP) to continue with 280 ongoing contractual commitments in which concrete pavements, retaining walls, drains, and culverts are being constructed to protect the integrity of the nation’s roads.

Additionally, a sum of $11, 500,000.00 is being requested to fund the ongoing contract obligations on the St. John’s Flood Mitigation Project at River Road, which commenced in August 2021 and is about 70% complete.

Related:  Ambassadors to be named within two weeks

The new government is also seeking $1 million for the Ministry of Foreign Affairs to fund the recalling of diplomatic posts, $883, 000.00 to purchase a fire tender for Carriacou, and an additional $360, 000.00 for the training of recruits within the Royal Grenada Police Force (RGPF).

The Supplementary Appropriation Bill also provides for $500, 000.00 towards the salary allocation for 65 Nursing Assistants at the St. George’s General hospital, an additional $500, 000.00 for the procurement of goods and services, and $100, 000.00 for Princess Royal Hospital in Carriacou.

According to the Grenadian leader, there are also several ongoing projects inherited within the Ministry of Finance, where in some instances expenditure was incurred that was not provided for in the 2021 Appropriation Act that authorised the expenditure for 2022.

These include the Grenada Development Bank (GDB) Special Loan to the Government of Grenada full-time employees $10 million, $15 million GDB student and low-income housing loan to provide credit facilities for students, and other citizens to access low-income housing, which PM Mitchell noted were approved by the prior Cabinet but not budgeted for.

However, Dr. Modeste-Curwen, who acknowledged that “there were some programmes that were not budgeted for and that these need to be addressed” used the opportunity to “suggest that maybe the amount that is proposed (in the Supplementary Appropriation Bill) may not be necessary if we do a reallocation of the ones (monies) that we project will not be spent.”

She said that the “budget for capital (projects) was about $333.8 million but the expected outcome is $300 million.”

“It seems to me that there would be some monies that would not be spent,” said the St. Mark’s MP, who insisted that “there is a reallocation warrant provision in the Public Finance Management Act that allows the government of the day to reallocate funds from other areas.”

“So, maybe we need to revisit that in another Finance Committee meeting…to let us know where the real supplementary would be so that we can recognise savings to do what has been proposed to do,” she told the sitting.

Dr. Modeste-Curwen also spoke about a significant increase under grants from what was previously budgeted for 2022, “compared to the estimated outturn…from $175.4 million to $259.8 million and a $38.4milion increase in non-tax revenues, stating that “it would be useful to know what would comprise non-tax revenues.

“What phase would be added? We do note that there is a decrease in revenue because of the cap on imports at customs. So, how does the government or the Ministry of Finance plan to juggle those figures to ensure that we cover all of those major projects that we are going to have and that we are covered for the next few months?

“Mention was made by my colleague about the new ministry and we on this side we look forward to information on that and some more detailed information as to where these monies would be spent but very important I just would urge that we look back again at the savings that could be realised based on the midterm document,” Dr. Modeste-Curwen added.

Government Minister and MP for South St. George Andy Williams, who heads the government’s new Ministry of Mobilisation, Implementation and Transformation, added his voice to the debate and explained that the ministry is “not just limited to infrastructural projects but revolves at the center of government to ensure that projects and programmes are implemented speedily.

“We are here to ensure that all programmes and projects are implemented on time because we have seen from the past (years) that Grenada has suffered from a low implementation rate when it comes to programmes and projects, and we were losing grants that were approved in the process, and so, our Prime Minister thought it was necessary to create such a ministry to ensure that we do not lose these grants, and to ensure that Grenada increases the implementation rate so that things can be done effectively,” he said.