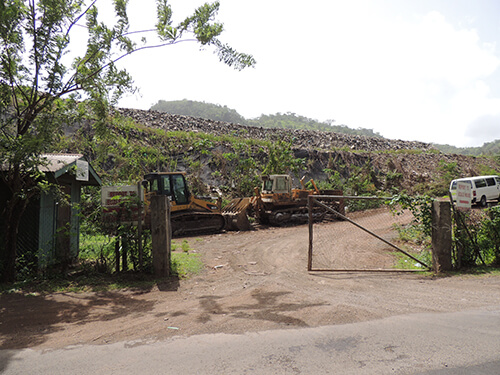 A major fire at Grenada’s landfill is being described by the country’s Opposition Leader Tobias Clement, a man who has highlighted the ongoing problem in Parliament many times, as a national environmental disaster.

Since 2017 the Perseverance landfill has caught fire and burned for months at a time, releasing toxic chemicals into the atmosphere.

Clement has raised the issue multiple times in the House of Representatives calling on the Keith Mitchell-led government to remedy the problem which he called “a burning shame” for the country.

On June 6, the landfill caught fire again and in the early morning hours of June 19 it erupted into a major inferno at a secondary site where tyres have been dumped.

The Grenada Solid Waste Management Authority (GSWMA) had started dumping general waste at the site designated for construction and demolition waste and used tyres there ignited, resulting in this latest major fire.

On the afternoon of June 19, the Authority called an urgent news conference on the matter and General Manager Lyndon Robertson said the financial cost to the country to control the Perseverance fires have been in the hundreds of thousands of dollars so far.

The fire was expected to burn for about three days before losing strength but Robertson said the fire experts advised that given the size of the blaze the best course of action was to let it run its course.

Robertson speculated that the fire, which was first detected on June 6, was started by someone but he said there is no surveillance video nor any evidence to suggest that this is so.

Robertson said fire intervention efforts for the fire that is now ongoing is estimated to cost $10,000 per week.

“The government and the government alone must be held responsible for this national disaster,” said Clement, who intends to write to the Commonwealth Secretariat on the matter.

Some months ago, the Opposition Leader tabled a Resolution in Parliament, calling for action to stop burning at the landfill and to create a new modern facility for waste disposal and processing.

At the time the resolution did not receive support from any of the fourteen MPs on the government side of the House, including Prime Minister Dr. Keith Mitchell in whose Constituency the solid waste facility is located.

The landfill has been in use for more that forty years and prior to 2008 the Mitchell-led New National Party (NNP) Administration had commissioned a study and a proposal for a new facility which never materialised.

Clement said the problem requires urgent attention because it is dangerous to public health and while he said he has no data to support his belief, he thinks that the exploding number of cancer cases occurring in Grenada could be related in part to the burning of the landfill.

“This is an environmental travesty that is unleashed on the Grenadian people,” Clement said, adding that, “only in Grenada is there a public main road passing through a dump site on either side”.

He said the fact that the government has allowed the problem to become so bad is a “catastrophic failure”.

He went on to say, “It is an embarrassment and it is shameful”.

Clement pointed out that there used to be a thriving community in Perseverance but that is no longer the case as a result of the environmental hazards in the area.

Landfills are harmful because runoff, carrying with it toxic chemicals from waste ends up in water supplies and communities surrounding landfills have had their drinking water contaminated by leakage.

Landfills give off methane emissions, a greenhouse gas 86 times more potent than carbon dioxide according to the Intergovernmental Panel on Climate Change, making it a powerful contributor to the climate crisis.

In addition, landfills give off potentially harmful gases and odours that can permeate neighbourhoods, and can be linked to birth defects and other serious health problems.

Clement said one of the major problems with the Perseverance dump site, apart from its age, is that it was not properly set up to begin with so there are no underground pipes to safely carry the build-up of methane out of the landfill.

But the GSWMA is saying that the fires may not be as a result of methane build-up.

“In order to reduce the possibility of these fires starting through human activities, whether it is intentional or unintentional, we have taken steps to increase our security,” the General Manager said during Saturday’s press conference held within sight of the burning landfill.

“So going forward we are hoping to enhance the security on our compound to restrict fires caused by human activities.”

Robertson said a new facility is in the making and that they are in the final stage of negotiation for funds to close the old site. He said they are negotiating with the Caribbean Development Bank.

“The plans for the closure include a gas control system and measures to reduce temperatures to prevent spontaneous ignition,” Robertson said.

Waste disposal methods at Perseverance have worsened the problem because waste is not separated and there are materials that could cause spontaneous ignition.

Robertson said closing the old Perseverance site would involve planting “capping vegetation” and it is estimated that the area would be “stabilised” within five to ten years.

A new method is to be used at the new site to reduce methane emission.

The new landfill would have a network of pipes and pumps for the eventuality that fires break out and a drone and heat sensors to monitor activity at the landfill.

“I would like to assure Grenada that the Grenada Solid Waste Management Authority is doing everything possible to control the fires that are currently ongoing at our facility and we are hoping that with the constant response and the efforts of our team and the Grenada Fire Service, we would be able to minimise that nuisance to the public and also the environmental and health hazards that could result in very short order,” Robertson said.

The landfill is also a threat to the habitat of the Grenada Dove, a national treasure.

The GSWMA General Manager said they will have to use the new landfill ahead of time because of the current situation.

NADMA issued a smoke and fire advisory Saturday, warning motorists of hazardous conditions along the Western Main Road due to the ongoing landfill fire.