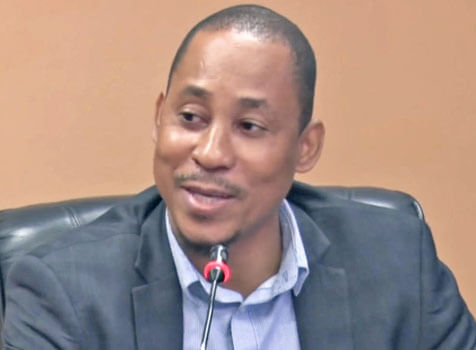 Acting Permanent Secretary in the Ministry of Finance Mike Sylvester: about 10, 000 persons will benefit from the one-off payments

A debate has ensued in some quarters concerning the Keith Mitchell government’s ability at this time to make one-off Christmas bonus payments to frontline workers for the sacrifices made during the ongoing coronavirus pandemic, which has resulted in less revenue collection over the past two years.

Acting Permanent Secretary in the Ministry of Finance, Mike Sylvester announced that EC $17.6 million will be expended from the Consolidated Fund to make the bonus payments as disclosed in the 2022 budget.

According to Sylvester explaining $8 million is expected to be paid out by today Friday, December 17, while another $9.6 million will be used to make one-off half-month salary bonuses to those public servants qualifying under criteria, which is currently being developed “relative to frontline workers…due to their risk to COVID-19.”

He said that “because we have to do some further work,” the process of paying out the additional half month for those workers can extend to “March next year.”

He pointed out that 10, 000 workers will benefit from this gesture, which would increase the government’s wage bill for December by more than half.

The issue of the payment has attracted the attention of newly elected Political Leader of the main Opposition National Democratic Congress (NDC), Dickon Mitchell who questioned the government’s decision to make the payment.

The 44-year old barrister-at-law cited the prolonged dispute earlier in the year over the 4% salary increase when the government repeatedly told teachers and public servants that it was “not in a position to pay” the wage increase as agreed around the negotiating table among the parties.

Dickon Mitchell expressed that view that “miraculously, two (2) years into a pandemic (and) two (2) years of a reduction in revenues, the government is now in a position to say, I can pay a Christmas bonus to public servants of one month or half month.”

“So, the government (is saying that it) now has resources, two years into a pandemic, to pay an extra $23 million…and, an additional half month salary,” he said.

The NDC leader observed that the NNP regime has been able to find this money at a time when the government’s monthly wage bill, including pensions stands at $30 million based on the 2022 budget statement presented in Parliament last month by Finance Minister Gregory Bowen.

“If you exclude the pensions, which is roughly around $6.5 million, you’re left with roughly a $23.5 million wage bill,” Dickon Mitchell said.

However, with revenue intake occurring at a slower pace, the government sought Parliament’s approval to invoke the Escape Clause of the Fiscal Responsibility Act (FRA) for yet another year, in a bid to manage the economy, meet monthly recurrent expenditure, and ensure that capital projects are carried out in 2022.

The FRA stipulates that the government’s “wage bill should not exceed 9% of the Gross Domestic Product (GDP),” and that the “Debt to GDP ratio should not exceed 55%,” which are among the fiscal measures waived with the suspension of the Escape Clause.

The debt to GDP ratio is currently “69%,” and the government intends to use approximately 34% of the 1.3 billion dollar budget for 2022 to repay debt.