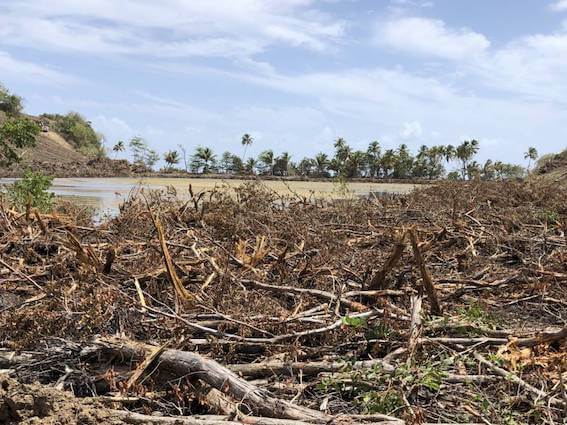 A leading environmentalist on the island, Dr. Valma Jessamy has distanced herself from claims made by Economic Development Minister Oliver Joseph that her company, JECO Caribbean Inc. had done the necessary Environmental Impact Assessment (EIA) to enable the developers to proceed with the proposed hotel at La Sagesse.

In a statement issued Friday, Dr. Jessamy said that she did an EIA for the hotel to be built at La Sagesse by Range Development but the recommendations made were never implemented.

Minister Joseph told a post-Cabinet press briefing on Thursday that the developers are proceeding with the project since the EIA was done.

According to Dr. Jessamy one of the recommendations made was for there to be consultation with villagers and stakeholders on the project which the government has said will provide employment for residents.

“The recommendations and mitigation measures provided by JECO Caribbean (have) not been followed. The services of JECO Caribbean have not been retained to supervise project implementation,” said the release.

Range has been coming under criticisms from sections of the country for the manner in which it has cut down trees in the La Sagesse area to facilitate its hotel to be built from the proceeds of the sale of Grenadian passports.

As a public service, THE NEW TODAY reproduces in full the text of the statement issued by Dr. Jessamy and her company:

April 2019, the environment and development consulting services of JECO Caribbean Inc. was retained by Range Developments to conduct the Environmental Impact Assessment (EIA) for the proposed La Sagesse Development Project.

The project included two hotel resorts with villas and ancillary facilities to be implemented in several phases. The draft Project concept had received outline development planning approval from the Land Development Control Authority through its Physical Planning Unit (PPU).

The outline planning approval required that an EIA be conducted before full development approval is granted. A detailed Terms of Reference (TOR) for the conduct of the EIA was not provided by the PPU.

JECO Caribbean utilised best practice to conduct the EIA to include a detailed site ecological survey, community household surveys and formulation of recommendations and mitigation measures for project implementation.

The EIA conducted was for the draft concept and JECO Caribbean has not had sight of the final designs or documents submitted to the PPU to obtain full planning permission for project implementation to commence.

The EIA Report was submitted to the client June 2019 who we assume submitted same to the PPU.

JECO Caribbean was never contacted by the PPU or the Environmental Review Committee who has a statutory duty according to the Physical Planning and Development Control Act of 2002 to conduct their own review and due diligence.

We assume that there were no issues arising from the EIA and that JECO Caribbean should have addressed.

As required by the Act, JECO Caribbean recommended in the preamble of the report that public consultations be held before commencing the project to address the concerns of the community which were captured during the household surveys.

Representations made to JECO Caribbean by Range Development project personnel with regards to their development approach were included in Section 3 of the JECO EIA Report.

Based on our current regulatory framework it is the responsibility of the competent authority and not the EIA Consultant, to ensure that the project is implemented within the guidelines under which approval were granted.

JECO is not privy to any of the discussions, instructions and interactions between the developer and the government. It is therefore irresponsible for Minister Oliver Joseph to pass the responsibility for the project failures to Dr. Jessamy and by implication JECO Caribbean.

The government of Grenada needs to implement the series of draft regulations and policies on their books with regard to environmental protection and physical planning development.