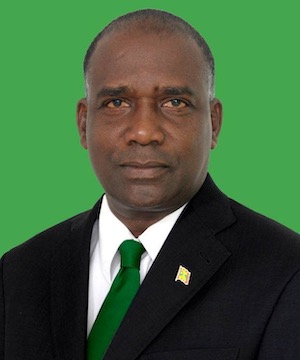 According to well-placed sources, the Minister did an eye operation a few months ago and is now experiencing some pain in the eye.

Word from inside the camp of the ruling New National  Party (NNP) is that the absence of the government minister has come at a terrible time as the political field is now left wide open for his opponent, Dickon Mitchell, the political leader of the National Democratic Congress (NDC) to consolidate his stranglehold on the St David’s Constituency.

One NNP insider said that most of the campaign workers of Minister Joseph are not even aware of his absence since the party hierarchy wanted to keep it a secret.

“We lose the seat now. It is difficult to pull back St David once the candidate is away for so long with the election only days away,” one NNP insider was quoted as saying.

The NNP considers St David as one of seven seats that the party is facing a stiff challenge in the June 23 general election.

A spokesman for Dickon Mitchell said he is aware of the health issue involving Minister Joseph and wants to wish him a speedy recovery since health knows no boundary.

Minister Joseph has cancelled all political meetings in St David until his return home on Friday.