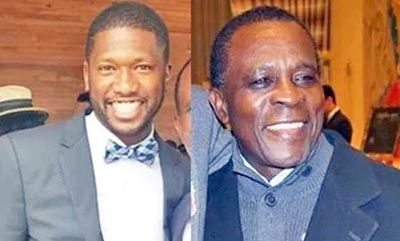 Chimera Spice Holdings, a company with a strong Russian link and tied up with Olinga Mitchell, the son of Grenada Prime Minister Dr. Keith Mitchell, is owing $144,000.00 to the Grenada Co-operative Nutmeg Association (GCNA) for a shipment of its nutmeg and mace products.

A source close to the GCNA governing Board of Directors told THE NEW TODAY that this money has been outstanding for over three years now and the association has not been able to get the company to honour its commitment to pay for the shipment.

He described Dr. Mitchell’s son as the person who brought a delegation from Chimera which is based in The Netherlands in Europe to discuss with the nutmeg association the purchase of nutmegs and mace on a regular basis.

He referred to Olinga Mitchell as “the go-between” in the deal that was struck between GCNA and Chimera until things turned sour.

“To the best of my memory he was the person who introduced Chimera to the GCNA. I think he actually brought the guys to us at one point. He actually was the go-between us in GCNA and Chimera,” he told this newspaper.

“We know that he was associated with Chimera in some form because he spoke on behalf of them. I cannot say exactly what role – whether he was a member of the company, I don’t know because we didn’t find out anything to that effect,” he said.

Checks made on the worldwide web revealed that Olinga Mitchell was the Managing Partner of Chimera International which “focuses on delivering high quality, difficult to procure spices, herbs and organic products from the Caribbean region”.

Olinga Mitchell and his company are associated with Grenada’s Ambassador to Russia, the U.S-based Oleg Firer through an arrangement with “My Caribbean” trade centre, with offices in Moscow and which is said to have been established to promote bilateral trade between the Caribbean, Russian and Eurasian markets.

The official recalled meetings that took place involving a GCNA delegation including Board Chairman, Leo Cato, its representative in London, England and then General Manager Marlon Clyne and some of Chimera representatives including a Russian and Olinga Mitchell.

According to the official, there was ongoing business between GCNA and Chimera until it stopped paying for the shipment of nutmegs and mace that were supplied to the company.

He pointed out that it was only the last shipment that the company received from the association that it did not pay off in total.

“It wasn’t like they did not pay for some of the shipments – I think it was the last shipment that was sent to them they did not finish pay for it,” he said.

Asked whether GCNA ever considered taking legal action in Grenada against Chimera since the original deal to sell to them was struck in St. George, he said, “we had consulted (with lawyers) on it but it’s kind of tricky. We have been trying to just use lobby to get the money because it could be an expensive process to challenge them”.

The official stated that one of the drawbacks to legal action related to the fact that Chimera was registered and located in Europe and there was the fear that it could become an expensive venture to go after the money.

He said: “It’s like the amount of money you have to spend to fight them legally the returns might be very small considerably. So we have been trying to use other pressure to get them to pay without having to get involved in a legal battle.

“We took the option of trying to see if we can get people to pressure them so that the debt can be paid. We spoke to our legal team and the best advice was let us see if we can lobby to get the money from them.

THE NEW TODAY has seen documents in recent days which seem to suggest that the company has gone into liquidation without paying GCNA and the Grenadian farmers for the last shipment of nutmegs and mace.

The Chimera website said the mission of the Olinga Mitchell-led company “is to enhance and increase the production of the spices we procure from our suppliers, coupling this with the reduction of lead time to market, simultaneously maximising distribution and increasing both Gross revenues and contribution for our partners.

“The team’s key advantage is that we provide our clients with better solutions than alternative vendors can provide, by being able to blend best of breed technologies from different suppliers and deliver lower capital and operating costs, supporting a closer match to the business requirements and leaving the client with the flexibility to adapt to future changes.

“This is seamlessly coupled with the expertise to create core efficiencies within the supply chain, increasing revenue and margin, reducing cost and inefficiencies. Because of our presence in the port of Rotterdam we are able to provide strategic storage and transport to our partners”.

The information presented on the Chimera website can best be described as sparse – an address in the Netherlands, a phone number, e-mail, a product guide and some photos and there is no” About Us” information.

The Chimera issue about monies owed to GCNA has resurfaced in recent days as Olinga’s father, Prime Minister Dr. Keith Mitchell is making moves to dissolve both the nutmeg commodity board and the Grenada Cocoa Association (GCA) and to liberalise the industry for open competition.