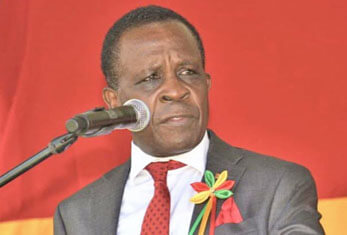 Prime Minister Mitchell - is the current Chairman of the OECS

The Organisation of Eastern Caribbean States (OECS), is working towards creating a harmonised approach for the collection, management, and utilisation of data related to the movement of people because of environmental or climate factors, which is necessary to drive policy decisions to combat the effects of climate change in the Eastern Caribbean.

This issue was highlighted by the speakers who addressed the opening of the virtual 3-day Regional Dialogue on Human Mobility and Climate Change Data conference on Monday, geared at enhancing the capacities of the governments of the six (6) OECS Member States, including Grenada, to collect, analyse, and utilise data on migration, environment, disasters and climate change.

During the conference which concluded on Wednesday, participants sought to review and discuss the findings of a new set of reports themed “Migration, Environment, Disasters and Climate Change Data in the Eastern Caribbean,” which is a collaboration between the German Federal Foreign Office and the OECS Commission.

The work was published with assistance from the Geneva-based International Organisation for Migration (IOM), which is an intergovernmental organisation that provides services and advice concerning migration to governments and migrants, including internally displaced persons, refugees, and migrant workers.

Prime Minister Dr. Keith Mitchell who addressed the opening in his capacity as OECS Chairman, gave his full support for the initiative, and underscored the need for understanding through improved data to build resilience.

Noting that all citizens of the OECS Member States are familiar with the impacts of climate change, the Grenadian leader stated that “understanding the impact of these environmental hazards such as hurricanes, and most recently with the eruption of the La Soufriere volcano in neighbouring St. Vincent, and the associated movement of people, through enhanced data collection, and analysis and improving the governance framework for addressing human mobility and climate change adaptation, is invaluable to our national and collective responses to these hazards.”

He stressed that “the outputs of this project will contribute to building resilience to these environmental threats.”

IOM Regional Director for Central and North America and the Caribbean, Michelle Klein-Solomon told the opening ceremony, that while “the recent history of the region is proof of the devastating impact these hazards can have including in terms of displacement…future projections are a cause for even greater concern.”

The female Regional Director emphasised the need for robust evidence to make sustained changes in building resilience against climate change, stating that “data and evidence are a crucial part of all these efforts…from climate mitigation and adaptation, to disaster risk management, and pre-mobility.

“Policy makers and actors on the ground need concrete and actionable information to develop and implement their activities,” she added.

She also brought focus to the progress that has already been made to address the impacts of environmental hazards on human mobility “in terms of free movement of persons” with the establishment of the Eastern Caribbean Economic Union (ECCU), which provides OECS citizens with the right to move and settle in any other participating islands.

This protocol, she said, offers a much-needed solution for persons who must leave their countries due to the impacts of hurricanes or other hazards.

Klein-Solomon also recognised the leadership of the Barbados-based Caribbean Disaster Emergency Management Agency (CDEMA) in risk management in the Caribbean and “the political will of Caribbean countries in international negotiations” which has been crucial to advance ambitious climate change mitigation actions and underscored the impacts of climate change in Small Island Developing States.”

The 3-day conference comes weeks ahead of the United Nations Conference of the Parties (COP26) summit, which will bring delegates together in Switzerland from October 31 – November 12 to accelerate action towards the goals of the UN Framework Convention on Climate Change and the Paris Agreement, which encourages countries to take action to keep global temperature rise in this century well below two (2) degrees Celsius above pre-industrial levels, and to pursue efforts to limit the temperature increase even further to 1.5 degrees Celsius, thus limiting further climate change.

Director for International Climate and Energy Policy and digital transformation at the German Federal Foreign Office, Ambassador Hinrich Tholken, who also addressed Monday’s opening ceremony, echoed the sentiments expressed by the IMO official, and acknowledged the detrimental circumstances the Caribbean would face if the goals set out in the Paris Agreement are not met in a timely manner.

“Global warming is man-made, and accelerating at an alarming rate,” he said, adding that “if the international community fails to reduce global greenhouse gas emissions significantly now, we will miss the Paris climate goals and certainly pass the 1.5 degrees threshold within the next 20 years.”

The German Ambassador pointed out that while “the consequences will certainly be devastating” worldwide it is a fact that “the Caribbean, in particular…a region that is among the least responsible, would be among the world’s regions hardest hit.”

Researcher Dr. Stephen Adaawen, who was part of the team involved in compiling the data analysis of each OECS country, cited gaps in the collection of data, and suggested that each member state and regional organisations such as the OECS, need to improve on the collection, storage, and management of data related to movement of people as a result of environmental or climate factors.

The regional overview report “Migration, Environment, Disasters and Climate Change Data in the Eastern Caribbean” is available online, free of charge, at the IOM Bookstore (https://publications.iom.int/books/migration-environment-disaster-and-climate-change-data-eastern-caribbean-regional-overview),

the Environmental Migration Portal, and the Global Migration Data Portal, as well as the website of the IOM Regional Knowledge Hub on human mobility in the region of Central America, North America and the Caribbean(https://kmhub.iom.int/en).