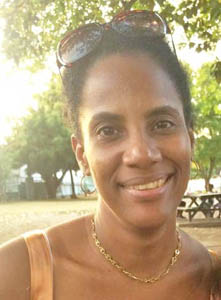 Patty Williams – forced to come public with her situation

“I learnt that Manager Dilsworth gave the order to admit/house a suspected COVID-19 Patient in a backroom on the OD ward. Nonetheless. I observed a majority of Nurses and none of the patients not geared with any form of the PPEs”

THE NEW TODAY has been presented with a report from a nurse at the St. George’s General Hospital who gave details in a letter pointing to the unpreparedness at the island’s main medical facility to deal with the coronavirus pandemic in early March.

Staff nurse Patty Williams touched on the lack of preparedness in a report that she did following allegations that she had abandoned the job in March.

As a public service, this newspaper reproduces in full the report from Nurse Williams:

RE: Allegations /Accusation/Exposure to COVID-19

Let it be known that on the 16th of March 2020, I attended a meeting as a representative of the Obstetric Department (OD). The meeting was (organised) by some Executive members of the Public Workers Union (PWU).

At the conclusion of the meeting, I returned to the Obstetric Department at approximately 6:30 p.m. On arrival at said department, I sat at the Nurses station along with Manager Maxine Dilsworth, Nurse Glenda Patrick and Nurse Adele Fraser.

I reported to Manager Dilsworth that I had just returned from the said meeting. She then requested an update on the meeting from me. I proceeded on her request by informing her of a major concern I had; although stated in the meeting that PPEs are available for staff, this was not a reflection of the OD’s operation.

To my greatest astonishment, she responded that she was not aware of such. I then assured her that our ADNS, Ms. Anoris Martin Charles, stated PPEs are available and it was the responsibility of each department to order for its staff.

At that juncture, Nurse Glenda Patrick interjected and confirmed each department had to order their PPEs. Nurse Patrick then asked me why I raised the concern. I then told her it was because I needed mine to function in my expected professional capacity whilst being protected from falling victim to the pandemic.

Manager Dilsworth along with Nurse Patrick and Nurse Fraser, surprisingly felt the need to inform me that PPEs were not for my personal use due to the fact it would only be assigned to workers when a COVID case was on the ward. I did not give any impression of wanting the PPE for my personal use.

On the 18th March 2020, I reported to work. It was then I learnt that Manager Dilsworth gave the order to admit/house a suspected COVID-19 Patient in a backroom on the OD ward. Nonetheless. I observed a majority of Nurses and none of the patients not geared with any form of the PPEs.

With the presence of such potential danger, I contacted a Union Representative, Ms. Rachel Roberts and related what I reasonably believed to be an alarming situation.

Ms. Roberts told me to inform my senior on duty that if the situation was not addressed I would have no choice but to remove myself for health purposes.

I then proceeded to speak to Nurse Glenda Patrick, in the presence of Nurse Antoinette Joseph, Nurse Cassie Noray, Nurse Buckmire-Mitchell. After asking Nurse Glenda Patrick to identify the person in charge of the shift, she informed me that it was Manager Dilworth who was at the meeting.

I said “okay, since you are next in line of seniority, I am informing you that I have been advised to remove myself from this predicament.”

She then told me go to the meeting to inform Manager Dilworth. I informed her that since Manager Dilworth wasn’t present, given her (Nurse Patrick) position of seniority and circumstance, I felt it necessary to inform her.

On the 19th of March, I was unwell; I had a headache and a runny nose. By then the Limited State of Emergency was implemented; schools had already closed and I had the sole responsibility of my youngest child being home.

My illness continued into the following day; by then I developed a fever. On the 21st of March, my condition worsened. As a result I contacted Nurse Marcia Archibald for advice; who works at the Emergency Department at the General Hospital.

Thereafter I proceeded to call Manager Jeanette Mitchell via her cell phone.

There was no response. I left a voice message which stated that I had flu-like symptoms and would therefore adhere to the recommended mandatory quarantine period.

In addition, I called Departmental Manager Nola Devonish and also got no response. I again left a voice message indicating same. To date none of these messages are acknowledged.

Furthermore, as I received no response, I called the OD. Manager Dilsworth who received the call. I identified myself and proceeded to inform her of my flu-like symptoms which made me unable to attend work. She asked whether I would send a sick leave. I then enlightened her of my knowledge of the decision made by departmental heads for persons with flu-like symptoms to self-quarantine – by her response it appeared she was not aware.

She then accused me of abandoning my job and questioned whether I returned to work since the days thereafter the accusation was made.

I suggested that my illness could have been a consequence of her on ward admittance of the suspected COVID-19 Patient. In response she stated that I was not in direct contact with the patient nor had I any reason to “walk out on the job.”

Given her unwelcoming tone and my ill condition, I advised her that it was not my intention to be a part of an argument but to simply clarify my situation.

Nevertheless, I called the COVID-19 Hotline and spoke to Dr. Charles. I then related my plight; my illness may have been caused as the COVID patient was admitted to the Obstetric Ward which warranted the patient to travel the ward’s entire length (the area of admittance is at the beginning of the unit and the patient’s destination was at the end).

I also expressed concern for patients who were housed in the immediate area. He told me that I had to be in direct contact with the patient to be infected. We now know this to be not factual.

However, at that time, I informed him that I understood the virus could remain on surfaces for a significant period of time. After a long conversation, Dr. Charles stated that since I believe that I may have been exposed, although he did not have any test kits with him, he would visit my home to do a test on the 23rd March. I still await Dr. Charles’s presence and test.

Although I was not on the job, my co-workers and I kept in touch. On or around the 3rd of May, Shenel Franklyn, my co-worker, provided me with further insight as it related to my matter. She was on the Obstetric unit and had spoken to Manager Devonish in relation to my maternal duty to my minor.

During said conversation, Ms. Franklyn stated that the Manager Devonish said I could bring my child to work with me and that she can stay in the store room which I had been working from.

Ms. Franklyn also informed me that Manager Devonish also stated that she had written up all her absenteeism forms and that she was not going to call me.

On the 6th May 2020, I returned a missed call which displayed on my cell phone. It was the Chief Nursing Officer (CNO), Ms. Nester Edwards. She stated that she got a report which indicated that I walked out on the job and that her purpose for calling was to investigate the report.

She elaborated that it was reported that I was never heard from or seen since the 17th of March. I asked her to confirm the literature of the report as I was appalled by what I heard. She did. At that point I became even more disturbed and disappointed as I knew the allegations to be untrue.

I again related the aforementioned occurrences, including my illness and the sole responsibility of my seven (7) year old (whom I had no other alternative care for her due to the pandemic). I also expressed the fact that the existence of such a false report could only be based on either miscommunication or malice.

As the conversation unfolded Ms. Nester Edwards told me that “the potential high risk patient tested negative.” It seemed as though the CNO was trying to justify the imminent potential danger of the admittance of the suspected COVID-19 patient in an open ward. They said the patient walked out of the obstetric unit, to be found two weeks later.

My final question to Ms. Edwards was – what safety protocols did the Ministry Of Health have in place for frontline/emergency workers like myself ?

It was then I learnt from her that the responsibility for our protection, as such workers, is not the Ministry’s but Cabinets. I also learnt from her verbal communication that the regulation states…stay at home and work and there is nothing in place for workers like me.

Upon completion of the conversation Ms. Nester Edwards said she would talk to the Permanent Secretary and see what could be done in my situation. I informed her that I will be submitting a report, as I deemed the experience of this entire encounter to be disturbing; plagued with untruth and absence of communication, compassion and proper protocols.