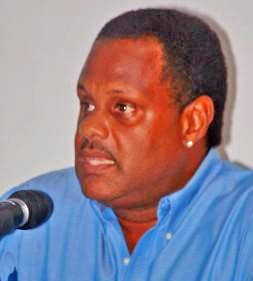 Unvaccinated cricket fans would not be allowed inside the Grenada National Stadium at Queen’s Park, St. George’s, when the West Indies takes on South Africa in five (5) T20 matches set for June 26, 27, 29, and July 1, and July 3 as part of the South African Tour of the West Indies.

Chairman of the local organising committee Troy Garvey made this announcement during Wednesday’s post-Cabinet media brief in St. George as he reinforced government’s call for persons to get vaccinated against the coronavirus, which was first imported into the country in March 2020, in order to gain live access to the matches.

Garvey said that while “serious consideration” is being given to allow spectators to attend the International Bilateral Series, which forms part of the Future Tour Programmes (FTP) that was announced by the International Cricket Council in 2009, “protocols are being planned…to accommodate persons that are fully vaccinated at the venue”.

“I am pleased to announce that serious consideration is given, and will be given (to having spectators) and it is quite crucial…,” he said.

“We have had lots of inquiries not only locally but also from the diaspora (inquiring about) what is happening (and if they) can come with the restrictions being lifted a bit (and) the number of flights now coming into the country on a daily basis,” he added.

Garvey went on to say: “We have quarantine protocols being changed for persons who are fully vaccinated, and I think it’s a great platform for persons who are in the New York market, who would like to come home just to get some ease from the stress and pressures of the COVID-19.”

Although not originally part of the schedule, Grenada was approached to host the matches due to the existing State of Emergency, and growing number of COVID-19 cases in the former selected host country, Trinidad & Tobago.

According to the President of the Grenada Cricket Association, Dwain Gill, although the request for Grenada to take up the mantle came with “very short notice,” being a host country for the matches provides an “opportunity to really welcome back cricket…into Grenada in particular”.

“We are pleased to accept the hosting of the West Indies/South African series…and we believe that we have the capacity, and ability to do so, based on what we have done in the past…,” he said.

“…We are accustomed (to) hosting international cricket…and, we are very happy that cricket is the one that would actually see us, you know, get us back to some semblance of normalcy,” he remarked.

Health Minister Nickolas Steele, who also addressed Wednesday’s media brief, used the opportunity to underscore the government’s position that “fully vaccinated events is the beginning of us getting back to the new normal after COVID-19, which is us being able to gather (and) recreate as we are accustomed to, or as we remember”.

“We have cricket, football (and) entertainment (and) all of these are being considered because a significant amount of people have been vaccinated, and therefore we can have those persons gather, congregate, meet (and) socialise.

“This is not something unique to Grenada – we are seeing many other countries (with) recent announcements by the (United States-based) CDC (Center for Disease Control), conform with everything else that we have been saying, as well as, with the WHO (World Health Organisation). So, we are pleased, and we encourage others to get vaccinated.

The Health Minister also announced that an additional shipment of 21, 600 AstraZeneca vaccines were expected to arrive on island on Wednesday from the Pan American Health Organisation (PAHO).

Minister Steele told reporters that while sourcing other vaccines is still on the cards “at this point in time, we only have access to the AstraZeneca vaccines”.

“We have said, and we will maintain our principle that we will only access vaccines that are approved by the WHO. So, we continue to try and get others that are approved but up to this point in time, we do not have confirmed access to any other type of vaccine. AstraZeneca is one of the most widely used vaccines in the world, and is extremely effective, and therefore, what I hope we focus on is the fact that the purpose of the vaccine is not like choosing one colour over another colour or one type of food or so. It is to take a vaccine that is effective (and) protect us and AstraZeneca vaccine is effective and it will protect us.

Although health officials are optimistic that all the vaccines can be used between now and the expiry date at the end of June, the government has been approached by other countries with a larger immunisation uptake, and considerations will be made to donate the excess to these countries.

Acting Chief Medical Officer Dr. Shawn Charles said: “The vaccines that we have on hand, their expiry date is coming to the end of June (and) we are seriously looking at our present uptake to determine the number of doses that we will administer by that expiry date.

“The excess that we are not able to administer, we have considered sending it to countries who have a better uptake…and we will do that at least with time enough so that they would be able to administer those vaccines,” he added.