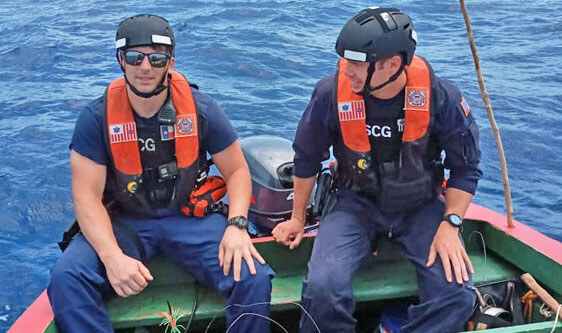 U.S Coastguard personnel are using the Shiprider’s agreement and the Caribbean Basin Initiative (CBI) to patrol the high seas in the Caribbean, according to a senior police officer in Grenada.

The police officer who spoke to THE NEW TODAY on the grounds that he was not identified said that U.S Coastguard personnel are allowed to operate unfettered in the waters off the shore of Grenada in order to engage in activities including drug interdiction operations.

He made the statement against the backdrop of a recent incident in which the occupants of a small fishing vessel were taken into custody five miles outside of Grenada nearly two weeks ago by U.S and Barbadian Coastguard personnel.

The owner of the small vessel who is from Café in St. Andrew South-east reported that he never felt so scared in his life as the U.S Coastguard pursued the small fishing boat in a high seas chase before he was out-run and caught by a small American Coastguard vessel.

The senior police officer said that under the arrangements that Washington signed with a number of Caribbean governments, the U.S is not required “to tell us nothing” about its operations in the area.

The CBI was negotiated by then U.S President Ronald Reagan with several hemispheric countries during the height of the Cold War in the 1980’s between Washington and the then Soviet Union as a counter to growing communist influence in the Western Hemisphere.

Grenada was then under the rule of the left-leaning People’s Revolutionary Government (PRG) of late Marxist leader, Maurice Bishop who had been promoting an anti-U.S agenda while cultivating close ties with Cuba and a number of Soviet satellite countries in Eastern Europe.

Under the Shiprider’s agreement, the US has the right to pursue suspected drug traffickers into the territorial waters of several regional states.

The agreement also makes provision for efforts to fight against gun smuggling, training of local officers and exchange of information on criminal deportees, as well as reciprocity on the ship boarding aspect of the pact, as well as US assistance in the areas of money-laundering.

The pact has been very controversial with many regional states complaining of being pressured by Washington to sign onto it.

There was a notable stand-off between Barbados and the United States in the 1990’s which led to a confrontation and a war of words between the superpower and the tiny eastern Caribbean island.

Late Barbados Prime Minister Owen Arthur had attacked the Shiprider’s Agreement as a “dangerous doctrine that has no place in the Caribbean.”

“Sovereignty is not divisible. For us it was won after a long struggle by those who believe that ‘massa day done”, Arthur was once quoted as saying.

Arthur went on: “There are those who have argued that sovereignty does not matter, that we are incapable of providing for our own defences against the advances of the drug barons, and that we should surrender our defences on this sphere to the tender mercies of those more capable than ourselves to provide our defence.

“This was the very doctrine – the Brezhnev Doctrine – that led to the subjugation of Eastern Europe to domination on the grounds that they could not provide for their own defence,” he added.

According to the senior police officer, Grenada is not getting any serious benefits from the CBI deal that was worked out more than 35 years ago.

“We sell out our rights to them and we are not getting anything from them for that – so that’s the hold they have on us. We are still their slaves in the true sense of the word,” he said.

The police officer indicated that oftentimes Grenada will not know that the U.S Coastguard is in its waters but on some occasions they might be informed.

“Most of the times (are) Special Branch and Drug Squad that will know – they wouldn’t even get in touch with the Commissioner of Police,” he said.

“The Prime Minister or the Commissioner of Police may not know that they (US Coastguard) are coming,” he added.

The police official pointed out that the US Secret Service might on occasion interact directly with the head of the Special Branch of the local police force on an operation inside Grenadian waters.

He indicated that the U.S has often been rather selfish when it comes to the exchange of information on the signed agreement.

He said: ‘They will demand certain things from me and when I demand from them too they are just not giving but I have to give them (and) at times I didn’t use to give because of what they wanted.”

The police insider pointed to information from RGPF on counterfeit currency in circulation in Grenada.

He said that the U.S still used to get ahold of the information and data collected by Grenada as the island was required by law to report it to the St. Kitts-based Eastern Caribbean Central Bank (ECCB) and Washington will get it from there.