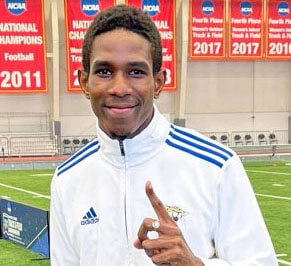 The Grenada Ministry of Sports has failed to honour a promise made to up and coming 400 metre runner, Gamali Felix to provide him with a monthly stipend of US$500.00 as part of an athletic scholarship that he is fulfilling in the United States.

Gamali attracted national attention earlier in the month when he put Grenada on the athletic map in the United States after winning the 2021 NJCAA national indoor championship with a personal best time of 46.63 secs.

A family member told THE NEW TODAY that the athlete came back home in April 2020 when the coronavirus started to get rampant in the US and did get some assistance from a state entity in the form of an airline ticket to fly back to the Spice Isle.

However, he said that when Gamali returned to his college in the United States there was a promise of a monthly financial stipend but this never materialised.

According to the family member, the state-owned Grenada National Lottery Authority (GNLA) did reimburse the family for the expenses they had to go through in order for the rising athletic star to travel to Barbados for the renewal of his US visa.

He said the Ministry of Sports will normally give US$500.00 monthly as a stipend to overseas athletes but Gamali only got it once.

“To say that he has had a consistent level of support from the Ministry of Sports – nah,” he remarked.

The source pointed out that the father, Martin Felix did engage 1st Vice-President of the Grenada Olympic Committee (GOC), Charlie George on the issue of assistance for his son to fulfill the US scholarship but nothing has so far come out of the discussion.

GOC is known to be in receipt of thousands of dollars from Olympic Solidarity (OS), an arm of the International Olympic Committee (IOC) to assist athletes on scholarships.

The local body is currently in turmoil as it cannot account for an estimated EC$440, 000.00 given by OS and will most likely have to repay it.

The source said that based on the conversation with the family members, they formed the impression that GOC “is in the process” of coming forward with some kind of assistance to the local track star in the making.

General Secretary of the committee, Veda Bruno-Victor is said to have assured the Felix family about two weeks ago that the local Olympic body “will render some assistance in the near future” and that the family is hoping that “her words are genuine”.

According to the family member, the top athlete did express concern that “he was not being recognised” by the sporting bodies back in Grenada for his exploits on the track in the United States.

“He was wondering why no financial support was coming for him from back home to focus on his athletics”.

The source said that the situation could have been a lot easier financially with the Felix family if some kind of financial assistance did come from the relevant sporting bodies in Grenada to help Gamali to complete his athletic scholarship.

This reportedly prompted the mother to tell someone that it might be better for the son to switch allegiance and run for the USA instead of the Spice Isle.

The 22-year old Gamali will on May 14 come to the end of the 2-year scholarship with Barton Community College.

However, THE NEW TODAY understands that a few universities in the USA have already expressed interest in getting him to enroll with them.

The source mentioned a university in Arizona and another one which Grenada’s 2012 Olympic 400m gold medalist at the London Games, Kirani James had attended while on scholarship in the USA.

“He (Gamali) has an interview this week with the University of Texas and that might be his choice – they have a great athletic programme there and Alleyne Francique is one of the coaches there,” he said.

Francique is a Grenadian who won two world 400 metre track races for the Spice Isle.

Over the weekend, Gamali reportedly lowered the time that he did in winning the 400M in the USA national indoor championship as part of a 4x 400 relay team.

The Felix family who is from the St George North-east constituency has a younger son who is recording some fast times locally in the 400m and is also looking to follow in the footsteps of his older brother with an athletic scholarship to the United States.