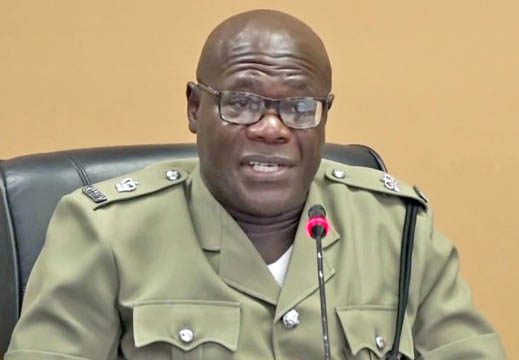 The Royal Grenada Police Force (RGPF) has denied reports circulating in some quarters including the law enforcement body itself that a female officer had tested positive for the coronavirus.

THE NEW TODAY newspaper contacted Acting Commissioner of Police, Edvin Martin on the issue and he directed Head of the Community Relations Department (CRD) of RGPF, Superintendent Vannie Curwen to address the matter.

In an interview with this newspaper Wednesday, Supt Curwen said that the Woman Police Constable (WPC) who reportedly had a possible direct link to the positive COVID-15 patient is not infected by the disease.

He stated that the officer concerned and another female who was also living in the same area where COVID-15 had frequented were given Rapid tests which came back negative.

At least four persons working at a mill alongside the COVID-19 patient have tested positive in recent days for the virus.

According to Supt Curwen, over 80 police officers have been tested in Grenada for the novel coronavirus and that all the tests conducted came back negative for RGPF members.

The senior police officer stated that some of the officers voluntarily agreed to take tests while others were requested to be tested for COVID-19 due to exposure to the virus due to their line of work.

He told the newspaper that some officers were asked to quarantine and did so while others have returned to work and some are still in self-imposed isolation.

THE NEW TODAY was able to get an internal memo from the High Command in which it requested those in charge of out stations to provide details of officers tested for the virus.

It reads: “Commanders, good morning. Can you please provide the number of personnel under you command that have been tested and those quarantine please? Will be grateful if I can have the numbers before the end of the day.

No names just the numbers.

Screening for the virus is ongoing within the force and thus far all results are negative. A number of our colleagues have also been quarantined as a precaution. We are all urged to observe all the protocols and stress on safety of self and others as we continue to give service in what is unchartered waters with an indefinite end game”.

Supt. Curwen was also asked to comment on reports that some rogue cops were bringing RGPF into disrepute by not performing to the best of their abilities in making sure that persons who were asked to quarantine at home adhered to the order.

The senior cop did not deny the allegation but made specific mention of a matter now under investigation by the Acting Commissioner of Police, Edvin Martin in which a report was received of a police officer spotted drinking in a bar.

The Head of the Community Relations Department (CRD) of the Police Force was asked to comment specifically on reports reaching this newspaper that in the murder that took place in Munich, St. Andrew two weeks ago it is alleged that some police officers were visiting the village but not telling curfew breakers to go inside as part of the lockdown battle against the virus.

Supt. Curwen acknowledged that such a report had reached the Police High Command and that the Commander in charge of the station was asked to comment on this allegation.

He said the Commander indicated that police officers do visit a number of villages but that some areas were not covered in regular patrols because they were way in the interior.

He added that the murder that took place in Munich was in one such area where the lawmen hardly cover on their beat.

Up to Wednesday, Grenada had recorded 20 positive COVID-19 cases with only 19 on the island as one patient had fled the island almost a month ago and returned to his place of residence in the United Kingdom.