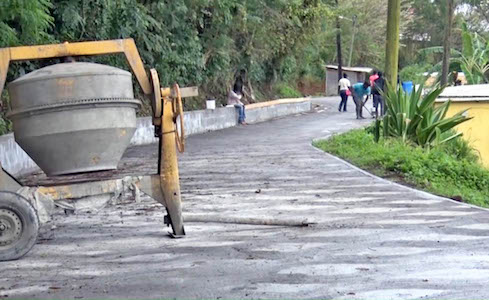 File photo of a concrete road being built in rural Grenada

A retired public officer believes that the new Dickon Mitchell administration could save on thousands of dollars paid out by the Treasury to private contractors through greater supervision of the scope of work given out to these people.

Speaking to THE NEW TODAY on Tuesday, the retired officer who worked for many years in the Ministry of Works and Public Utilities said that there is massive corruption in the awarding of contracts due to the scrapping of the Public Works Department by the defeated Keith Mitchell-led New National Party (NNP) government.

However, he advised against the National Democratic Congress (NDC) government of Prime Minister Dickon Mitchell bringing back the Public Works Department in government given the cost factor that might be involved.

“What you need is real good supervision of those contracts. You cannot leave it as it is – it is too open for corruption,” he said.

According to the retired public worker, the island needs Value for money and the new leaders should concentrate on getting qualified engineers to work out the rates for all scope of work contracted out to private contractors.

He said there is no need for Grenada to return to the days of operating a Department of Public Works like in the 60’s and 70’s.

He stressed that it is much cheaper for the State to assign an engineer in its employ to ensure greater control and monitoring of contracts and approving of contracts.

“Greater control and supervision is what is needed and it must be transparent – that is the way they should go,” he added.

The retired civil servant stated that the new administration should not focus on bringing back a Public Works Department because those employees on the government payroll will have to be paid for being on the job on a daily basis even if there is no work taking place on a project due to a lack of material like bitumen in road construction.

He said that if the job is contracted out to a private business then those people will have to bear the cost of the days when there is no work for their employees.

In addition, he said if the work is given out on contract to the private sector it will be more cost-effective for the state, as well as more professionally done.

“If the contractor didn’t do it properly then they have to come back and redo it,” he told THE NEW TODAY.

The retired public worker cited some cases in which imported bitumen from Trinidad to do road work might be of poor quality and it is not getting hard but just staying soft.

According to the official, the new rulers in Grenada should take steps to ensure that all contracts are properly controlled and that an officer from the Ministry of Works should be appointed to take charge of all road works that are put in the hands of private companies and individuals.

He also suggested that there should also be standard rates set by government when hiring contractors to do work in any given village on the island.

“So when an engineer knows that a patch of road cost $8000.00 and that is standard rates that they establish among themselves and the contractor doing a piece of work in St Paul’s and if somebody else is doing the same thing in La Tante – same characteristics, same scope of work, same soil density test and you are telling me that same piece of road could cost as twice as much.” he said.

He also said that the State can use the standard rate process to hire contractors to do work in cases of emergency.

“…If there is an emergency that pops up, you have your rate already (in place) and people who do work for you based on the rates can be hired to do the emergency work.

“You can instruct (a contractor) in an emergency situation to go and check that piece of work and execute the necessary repairs.  It might be a holiday so it will cost a little more than if the scope of work was done during the normal working days in the week based on the labour laws in the country.