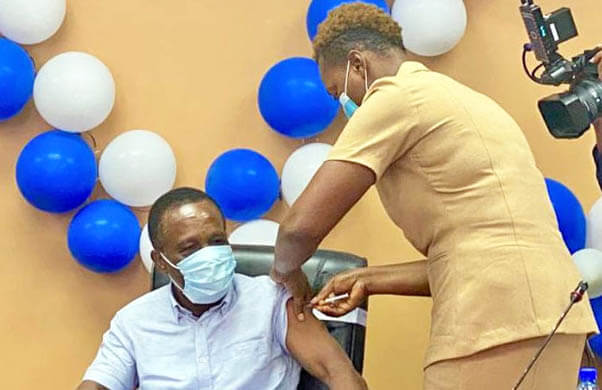 A debate has started in Grenada on the failure of a nurse to put on gloves to administer the first set of Covid-19 vaccines to reach the island to Prime Minister Dr. Keith Mitchell in keeping with the decision taken by government to give priority to frontline workers.

The issue came to the fore after the local media was able to witness the nurse administering what appears to be the vaccine to Prime Minister Dr. Keith Mitchell a week ago.

The President of the United States, Joe Biden was vaccinated a few weeks earlier by a nurse using gloves on both hands.

According to a senior nurse at the St. George’s General Hospital, gloves should be used by medical personnel to administer vaccines during a pandemic period like the coronavirus.

“I didn’t see them identify the vaccine, show the vaccine and show her actually pulling up the vaccine from the vial – all that is supposed to be done,” she told THE NEW TODAY.

“If they are promoting universal precautionary health infection control measures she has to wear gloves. What I find strange is that this nurse was a District Nurse. I understand that they pull her in not too long ago to work in the ministry so she should be aware of what she ought to do,” she said.

The nurse said that this procedure should be followed in order to avoid doubts in the mind of persons about what is being administered as “you can simply inject water in somebody’s arm and say it’s a vaccine”, adding that there was a lapse in protocol without the use of the gloves to administer the vaccine.

“For infection control, everybody should be wearing gloves. Secondly, she was supposed to identify the vial and show persons that this is the name of the vaccine before she administered it.

A former senior official within the ruling New National Party (NNP) government chipped into the debate by raising doubts about the true intention of the event.

He said that this is a vaccine to deal with the deadly Covid-19 disease that was being administered and not something like injecting penicillin into a patient in a much simpler environment.

He stressed that the powers-that-be have often been advocating to the population that the main protocol in Covid-19 is wearing a mask, keeping a clean hand and sanistising as often as necessary.

“Man is not touching one another hand – they are bouncing elbows. You are not supposed to touch somebody with your hand – you bounce elbows. The protocol is don’t touch hands and don’t touch but bounce elbows”.

The former government member felt that the medical protocol was not followed in administering the vaccine to the Prime Minister and formed the impression that it was nothing more than “a photo op” by Dr. Mitchell to promote the Covid-19 vaccination programme.