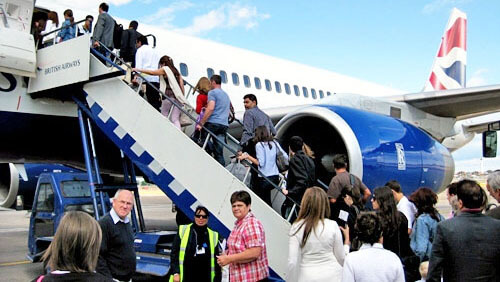 A leading travel industry official in Grenada has questioned the accuracy of statements made by the island’s Prime Minister Dr. Keith Mitchell that the industry will reopen in April with the resumption of international flights from Britain.

The official said that he had check the system and that there are no flights coming to the Maurice Bishop International Airport (MBIA) at Point Salines from the UK in April and even May due to ongoing problems with the coronavirus.

He said that British airways officials are quoted as saying that they might resume flying to Grenada in June for the earliest.

He told THE NEW TODAY that this is even conditional based on new regulations put in place by the British government to impose a fine of 5000 British pounds sterling on persons who travel abroad without a valid reason for doing so.

The £5,000 fine for anyone in England trying to travel abroad without good reason is due to come into force this week as part of new coronavirus laws.

Foreign holidays are currently not allowed under the “stay at home” rule which ended last Monday.

British Prime Minister Boris Johnson said it was “too early” to set out new foreign travel rules for the summer and he hoped for more information by 5 April.

From this week the ban on leaving the UK will become a specific law, backed up by the threat of a fine.

Under the current plan for easing restrictions, the earliest date people in England could go abroad for a holiday would be 17 May.

It comes as another surge in Covid cases in continental Europe, as well as the slow rollout of vaccines across Europe, casts doubt on the resumption of holidays abroad.

Health Secretary Matt Hancock said restrictions on travelling abroad for leisure were necessary to guard against the importation of large numbers of cases and new variants which might put the vaccine rollout at risk.

Airlines UK, which represents big carriers, called for a “tiered system, based on risk” and confirmed airlines were working with government to restart international travel safely from 17 May.

According to the Grenada travel industry official, in the current circumstances, both BA and Virgin Atlantic will only fly into MBIA if the passenger load is there to do so.

“BA and Virgin will not fly unless there is a guaranteed load,” he said, adding that “they will not be flying empty aircraft and if they did it will be only one a week.”

The industry official is predicting that BA will prefer to fly passengers bound to Grenada into Barbados and for them to take a connecting flight to make their way into MBIA.

He noted that when a Grenadian goes to the UK they have to quarantine for 10 days and as such it is not an attractive proposition for flying.

The airline industry official said that one positive for Grenada from Covid-19 is that the Grenadian taxpayers might have saved some money since it limited the number of overseas trips being undertaken by government ministers and officials.

“Every month they were jumping in and off planes and that is one benefit (to taxpayers)”, he remarked.