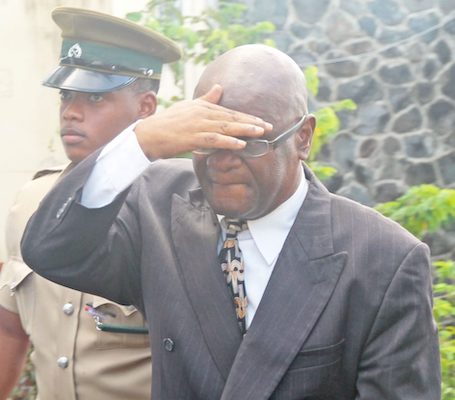 The Court of Appeal has refused to grant bail to 73-year-old convicted fraudster Finton De Bourg, pending the outcome of his full appeal, carded for April 2020.

In dismissing the bail application put before the court by De Bourg’s American-trained Attorney, Jerry Edwin last week Friday, the court said it was not satisfied that there were sufficient reasons why bail should be granted to the convict who is said to have a long list of ailments.

THE NEW TODAY understands that De Bourg, who is currently serving a 23-year jail term, requires among other things, two (2) separate cataract surgery, was seeking to get the court to grant bail to him on the grounds that the prison is unable to provide him with a place to treat his ailments.

According to Attorney Edwin, a letter submitted to the court written by the doctor at Her Majesty’s Prison after consulting with the ophthalmologist at the St. George’s General Hospital, “didn’t go far enough to justify the ability or the capacity of the prison to give Mr. De Bourg the medical care he requires” as there are concerns surrounding “issues of infection, recuperation, following the surgery.”

The attorney said that the prison does not have anything in place to handle DeBourg after the surgery but the letter from the doctor was lacking in this regards. In December 2016, De Bourg, who was the CEO and Chairman of the Board of Directors of Capital Bank International, was sentenced to a total of 23 years in jail after being found guilty on six (6) fraud-related counts, in connection with the misappropriation of $166.25 million from the bank, which was not accepted in to the Clearing House facility of the Eastern Caribbean Central Bank (ECCB).

Guyanese-born Judge, Madam Justice Paula Gilford, who handed down the sentence at the St. George’s No. 2 High Court also prohibited De Bourg from engaging in any financial operations in future and ordered him to pay a total of $166.25 million within five (5) years of his release from prison to the Receiver of Capbank and failure to do so will result in the businessman having to spend an additional 3 years in prison.

De Bourg, who is appealing against both his conviction and sentence, appeared to be uneasy upon learning that the court had refused him bail and even after the decision was announced, continued to insist that his bail application be heard.

The Westerhall businessman was taken back to the Richmond Hill Prison where he will remain until his next court date in April 2020.