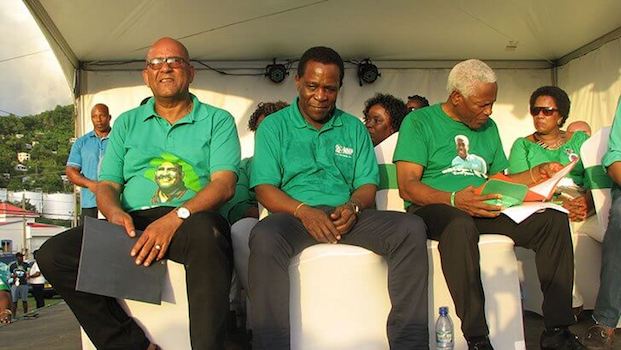 There are growing signs of unrest among the youth within the ruling New National Party (NNP) government of Prime Minister Dr. Keith Mitchell.

THE NEW TODAY has obtained a presentation made Thursday by a youth leader of the party at a forum held via Zoom which was attended by the Prime Minister.

The youth who is from the rural St. Andrew North-West constituency of Social Development Minister Delma Thomas was very critical of some of the initiatives undertaken by the administration to solve youth unemployment including the flagship Imani programme.

Prior to the coronavirus pandemic, youth unemployment in Grenada was put at 50%.

Hundreds of young people have lost jobs as several businesses were forced to close their doors due to measures taken by the State to prevent the spread of the deadly virus on the island.

In the presentation, the NNP Youth raised concerns about the policies being pursued by the Mitchell-led administration as too much emphasis was being placed on concrete buildings.

She said: “…I ask you Mr. PM to ask yourself this – what will happen with the youth 20 years from now? For me when I try to envision it, I see mega buildings, great infrastructure, a lot of foreign investment but I question the social advancement of our young people if we continue on the current path”.

“We sit and watch foreigners come, buy land, build houses, while we live like second class citizens in our own country. Simply because we cannot afford to buy these lands, not that we don’t want to but because we cannot access financing so we just stand aside and watch,” she told the Prime Minister.

As a public service, THE NEW TODAY presents an edited version of the presentation made by the NNP Youth Leader from St. Andrew:

“My name is (name withheld) and I reside in the Constituency of St. Andrew’s North West. I am currently employed as a Field Officer collecting Statistics for a number of institutions. I say that to say that I traverse several parishes including Carriacou and Petite Martinique and come in contact with a wide cross section of persons both old and young on a daily basis.

I am also very active on various social media platforms and scores of persons will call or message me to engage in meaningful discussion or register their concerns.

With that being said some of the concerns that I will raise this evening is not only my opinion but that of many. It is the genuine issues I hear on a day to day basis.

Imani/ M-power/Contract workers:
I’m in conversation with young people – in every 10, possibly 8 would register some form of hopelessness with these programmes and their ability to make advancements in life.

We live in a different era, some of us want our own homes, to turn our own key – we’re no longer satisfied with the extended families living arrangements.

While these are very good programs in concept because training is always needed, the succession process of these programmes is not properly thought out as it relates to transitioning from training to permanent employment, self-employment or sustainable employment.

I am personally grateful for the Imani programme as this was my stepping stone to self-improvement, however there are some fundamental problems with the program. There are Youth who are well qualified, performing in some cases more than permanent employees, some graduates of SGU with degrees and still stuck in the Imani with no hope of improvement.

I know of one person who started the Imani at age 33, now has a degree from SGU, today is 40, just 20 years shy of retirement and is still under the Imani working for $1000 a month. No hope!

She can’t get a loan because her two year contract term has ended, can’t buy a house, can’t even go to Courts – the only loaning institution – they have access to give them loans at ridiculously  high interest rates ( we still have to say thank God for Syrians)

One person said to me recently, “I feel like Imani is all the government has to offer, when the Imani started it offered hope for young people, now-a-days there is nothing hopeful about joining the Imani program.”

This kind of comment does really make me sad as a youth myself because I do understand where they are coming from.

As a contract worker I can tell you of some of the difficulties I face, my contract is contract for services so I am technically self-employed, even though I work with government. There are no benefits for us to obtain (just as some of our nurses and scores of other youths) self-development for us is a challenge.

I recently applied for a loan of $6000, yes it was granted but I had to repay that loan within my contract period which means I had to pay a significant amount from my salary, but with the new construct of our current contract I can’t even get a blender from Courts because we cannot obtain a job letter.

How are we supposed to move up in life? We sit and watch foreigners come, buy land, build houses, while we live like second class citizens in our own country. Simply because we cannot afford to buy these lands, not that we don’t want to but because we cannot access financing so we just stand aside and watch.

What is the exit strategy for the new Imani program if there is any? Is the program really doing what it’s intended to do? Are these trainees getting the jobs created by all the investment in the hospitality sector or other sectors? Is the Imani program linking with the National Youth development agenda if there is one?

Are we truly preparing our young people for these jobs or is it just another means to an end?

Meaningful youth engagement:
Some youth complain about the following:-

Because of these issues communication between MPs and youth constituents are not forthcoming (most times you hear them say everything good man, them youth happy but don’t have a clue as to what’s happening in the nook and cranny of their constituency)

I for one believe that we voted for these MPs to represent us and if we think that something is not in our best interest we have a right to speak out about it without these MPs getting into their feelings (it’s almost a year and a specific group of young people are still awaiting a meeting from our Youth representative).

I am a member of the New National Party, I have campaigned for the NNP, voted for the NNP and if in my opinion the party I have voted for is not representing my best interest or my children’s interest, I think I reserve the right to speak publicly.

MPs and supporters alike need to understand that because you support a party doesn’t necessarily mean that you will support all it stands for – they need to respect our differences.

Some of the people sitting in certain positions need to be told the difference between party and government, they need to understand that they represent the general public not family, friends or party supporters, while the party needs to take care of its people, the government however needs to take care of the citizens of Grenada.

I have seen and heard stories that seem to indicate that most persons in certain positions don’t understand that. There is a lot more that I will like to highlight but time doesn’t permit.

As I conclude I ask you Mr. PM to ask yourself this – what will happen with the youth 20 years from now? For me when I try to envision it, I see mega buildings, great infrastructure, a lot of foreign investment but I question the social advancement of our young people if we continue on the current path.

Would we (the youth) benefit? Would we own lands? Or would we be exploited by these developers? These are some of the questions I often ask myself.

Mr. PM, MPs present, I thank you for all that you have been doing and will continue to do. The last election has shown that the youth favours you, however these issues that I have raised are not just my issues but the issues of many young people as it is one thing to have our support and then lose it.

I still believe that if an election is called today NNP will win but I will not want these issues to be taken for granted and go unattended to because these are some of the issues we will be voting on next election.

I hope this is not the first and last meeting of this nature because some youth believe some MPs do not bring our concerns and queries to your attention.

Again I say thank you for the opportunity to express not on my behalf but on behalf of a wide cross section of young people”.