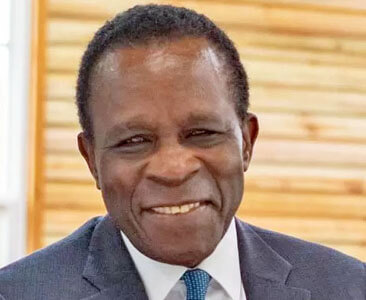 Dr. Keith Mitchell – still firmly in control of his party

Pressure is mounting within the New National Party (NNP) for the long-standing leader, 76-year old Dr. Keith Mitchell to step aside and make way for a much younger person to take over as political leader.

Well-placed insiders told THE NEW TODAY that following the party’s loss in the June 23 general election to the Dickon Mitchell-led National Democratic Congress (NDC), several moves are afoot to seek a replacement to head the island’s most successful political party in recent times.

According to one insider, there is deep division within the ranks of the six successful NNP candidates at the polls especially among the ex-Prime Minister and his former Social Development Minister Delma Thomas, the current Member of Parliament for St. Andrew North-west.

She said the two have not been on speaking terms in recent months with the female parliamentarian believing that Dr. Mitchell is behind the recent spate of attacks on her.

Thomas has been subjected to several verbal tongue-lashing from many NNP supporters following her contribution to the 2023 budget debate after the package for the fiscal year was presented in Parliament by Prime Minister Dickon Mitchell in early December as she gave support to some aspects of the financial figures.

The NNP insider said that one of the other NNP MPs in the Lower House of Parliament from St Andrew called her personally on the phone “to give her a good cussing off” following her response to the budget.

She indicated that the anti-Delma Thomas sentiments took a turn for the worst when she made public utterances to use the Christmas holiday period to visit the Constituency to bring merriment in homes in the company of her rival in Congress, Gloria Thomas.

Several pictures were posted on Social Media in which the two female politicians were seen visiting a number of homes together.

According to the insider, the St Andrew North-west MP sees nothing wrong in her action as her leader when in government always called for unity among politicians in the national interest.

THE NEW TODAY could not independently confirm reports that the St Andrew North-west MP had to put up a struggle with her husband to vote for NNP in the June 2022 election.

The pro-Keith Mitchell side within NNP believes that the female MP is now throwing her support behind one of the 6 opposition members, former Agriculture Minister Peter David who is being encouraged to challenge the ex-Prime Minister for the leadership of the party.

The source also pointed out that the division within the NNP is growing as David is believed to be visiting some Constituencies to seek their support to mount a challenge against Dr. Mitchell.

He quoted a prominent member of the David faction as saying that it is only the former Prime Minister who is not aware that his political future in the country “is just about over and that he is delusional” about getting back into power.

Dr. Mitchell has publicly stated that he has no intention of contesting another general election on the island and would help in the search for a successor.

About fifteen months ago, former Education Minister and party Chairman Anthony Boatswain was named as head of a Search party to look for a new leader for NNP but apparently it came to naught.

UK-based female attorney-at-law Akima Paul was being touted as the leader-in-waiting to take over from Dr. Mitchell, the longest serving Member of Parliament in the history of the country.

The plan, according to NNP insiders, was to get Member of Parliament for St Mark Dr Clarice Modeste-Curwen to step down in the NNP garrison constituency to provide a safe seat for Paul who would also land the post of Deputy Prime Minister.

The NNP has postponed its much anticipated Convention to elect a new leader for some time in 2023.

Parliamentarians Peter David and former Education Minister Emmalin Pierre are currently considered as the early front-runners for the post.

The pro-Mitchell forces in the NNP have been spreading “word on the ground” that David is too old to be considered as the new leader of the party given the fact that he would be around 70 years at the time of the new poll.

Close aides of the former Prime Minister said that he is believed to be courting US-based Educator Dr. Anthony Bridgeman as the next possible leader of the party.

Bridgeman was the guest speaker of one of the NNP rallies in the June 2022 election campaign and focused his address on leadership.