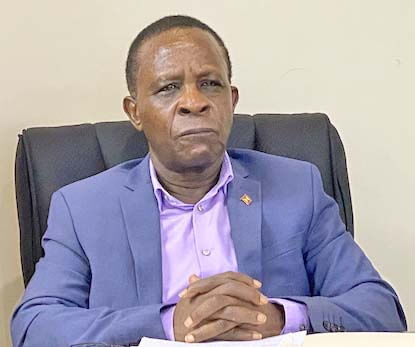 Prime Minister Dr. Keith Mitchell – setting up a committee to determine who should get medical attention at the hospital

There is mounting evidence that as Covid-19 infection rate continues to mount in Grenada, the Keith Mitchell-led government is coming under fire from its own supporters for its handling of the situation.

Well-placed sources told THE NEW TODAY that the national Covid-19 team is not happy with government’s response to the virus crisis on the island.

A source who asked not to be named said that some team members are “totally fed-up” as Prime Minister Mitchell and his Cabinet of Ministers continue to ignore some of the key recommendations made to help flatten the curve of the virus which has been wreaking havoc in the country over the past three weeks.

He spoke of committee members holding the view that there should be a total lockdown of the country in an effort to tackle the rising number of positive cases but the Grenadian leader is insisting that the country has to remain open.

On August 5, Grenada had only 172 cases but by Tuesday night this week it had reached the staggering figure of 1613 cases with 13 deaths.

A health official has estimated that about 80% of the country is now affected by the deadly virus.

In addition, a number of persons suspected of having Covid-19 are complaining of experiencing difficulties in getting tested for the virus as the health system is seemingly buckling under the pressure.

THE NEW TODAY has been able to obtain a leaked Social Media exchange involving NNP activist, Bobby Steele who was highly critical of the performance of Prime Minister Mitchell and his handling of the coronavirus pandemic.

Steele was very critical of the national address delivered last Friday night by PM Mitchell over its failure to promote vaccination as one of the ways to tackle the Covid-19 crisis on the island.

He said the Prime Minister dealt with some lockdown measures and urged Grenadians to eat healthy but “nowhere in that speech did he mention go and take the vaccine”.

Speculation is rife that Steele’s outburst is an indication that there is a growing rift between the well-to-do people in the south of the island and the Grenadian leader who has received heavy financial support from them in past elections as opposed to the main opposition National Democratic Congress (NDC).

According to Steele, over the years, he has been “a strong supporter” of the Prime Minister and NNP but is suspicious of the decision taken by the Grenadian leader to remove Member of Parliament for the South St. George constituency, Nickolas Steele from the prestigious position of Minister of Foreign Affairs and to send him to take charge of the Health portfolio.

He charged that many people believe that PM Mitchell did this to Steele “to fail” and not go there “to be successful”.

“You move one of the most successful ministers of Foreign Affairs and you put him into Health where you know the respect factor for people respecting him will be very hard because, one, he has no background in Health, two, he is a Chain-smoker and then you put him there,” he said.

Related:  Gemma Bain-Thomas could be contracted to help

Steele pointed out that this move by the Prime Minister “backfire” in this pandemic period as Minister Steele’s business leadership “kicked in and he did well.”

However, he noted that since the Covid-19 struck the region, the persons in the Caribbean leading the charge of their respective islands in the fight against the pandemic is the Prime Minister of the country but this is not the case in Grenada.

“All along in this the Prime Minister (Keith Mitchell) never took responsibility for this (fight against the coronavirus) – all along it was Nikki talking and in my opinion I think that came because the Prime Minister wanted when it failed, he didn’t want to be linked to it – it would have been Nikki’s downward spiral.

According to the NNP political activist, things are now “really bad” in Grenada with the Covid-19 situation and PM Mitchell is still not coming out to take the lead and address the spiraling virus situation in the country.

Steele also blasted Prime Minister Mitchell for leaving the island last month in the middle of the Covid-19 crisis allegedly to check on his health.

“In the old days a King (was) the man leading his team into the war – he’s the man out front on the battlefield. That’s where the King gets his strength from – not sitting in the back, not playing this background role and you playing politics.

The activist indicated that PM Mitchell is playing a dangerous game at the moment which is only helping to give the virus an opportunity to mutate.

Earlier in the week, both the US and UK Governments downgraded Grenada’s Covid-19 status with warning to their nationals to avoid travel to the island due to rising virus infections among the local population.