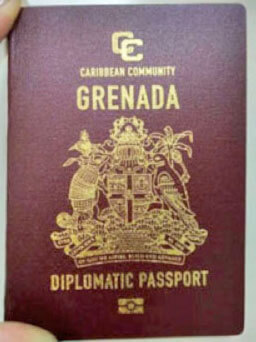 A Polish national handed over EC$787,901 to NNP in the middle of the election campaign in exchange for a Grenada diplomatic passport

We have the records.

Those words were issued Monday night by Prime Minister Dickon Mitchell as he shocked Grenadians with the revelation that monies earmarked for the Government Treasury ended up in a bank account of the South St George Constituency office of the then ruling New National Party (NNP) of defeated Prime Minister Dr. Keith Mitchell three days before the June 23 general election.

It was the first major announcement from the Political Leader of the National Democratic Congress (NDC) since assuming office four months ago about monetary corruption that took place in the NNP’s stewardship of the nation’s affairs between 2013 and 2022.

Addressing a Town Hall meeting at the Trade Centre in the south of the island, the Grenadian leader said a Polish national applied to the Keith Mitchell-led government for an appointment as an Ambassador-at-large and it was agreed to grant him diplomatic status on payment of a fee.

According to PM Dickon Mitchell, the defeated NNP regime informed the Polish citizen that in order to get the job he had “to pay US$290, 000.00 to the State of Grenada.”

The Prime Minister said that US$150, 000 was actually paid “to the State of Grenada and there is a Treasury receipt for it” and that another US$140, 000.00 “was paid to the New National Party South St George office in June right before the election.”

Investigations carried out by THE NEW TODAY seem to suggest that three ministers in the ousted regime were the mastermind of the scheme to divert the money away from the Treasury and into the account of the NNP for electioneering purposes.

Prime Minister Dickon Mitchell revealed that the Polish national has been asking back for his money as reports in the international media indicate that the diplomatic passport was not handed over to the individual by the defeated regime.

“The State of Grenada has no intention of paying back any money to anybody but I also want to point out and give some free advice to the South St George branch of the New National Party that you might have to pay back the man his money but that is free advice – you could take it or leave it,” he said.

The new Grenadian leader accused the regime of his predecessor of quite clearly engaging in what he called “trading in diplomacy” and to be more precise “trading in a diplomatic passport”.

“This administration has put a stop to this – we will not do it and it is wrong. It is as simple as that,” he told Grenadians.

PM Dickon Mitchell went on to say: “And for a government days before an election to be suggesting to people that they could be made diplomats in the middle of an election campaign is ridiculous. That is the kind of challenges that we have had to treat with because the past administration has appointed people as diplomats who do not feel that they are accountable to the State of Grenada – they don’t want to speak to the Minister of Foreign Affairs, they don’t want to speak to the PS in the Ministry of Foreign Affairs and if you give them a chance they ain’t even speaking to me as the Prime Minister.”

Prime Minister Dickon Mitchell addressed the issue against the backdrop of a report in the international media that the government of Antigua had fired one of its passport-selling agents, Kemal Nicholson who was caught up in the botched sale of the diplomatic passport from Grenada.

The report said in part that Nicholson was at the centre “of a seemingly massive corruption scheme involving an illegal sale of a Grenada diplomatic passport to a questionable individual that involves cash exchange with several former ministers.”

“It is very strange that a purported Antiguan envoy would be seemingly promoting the sale of Grenadian diplomatic passports just days before the last election (June 23, 2022) in a final ditch attempt to raise money. Despite the presumably payment of the significant amount of money, the individual did not receive his promised diplomatic passport,” said the report.

This is the first time that substantive evidence has been presented in Grenada itself that the NNP government was engaged in the business of selling diplomatic passports.

U.S investigative journalist David Marchant had accused Dr. Keith Mitchell of accepting a bribe payment in June 2000 of US$500, 000.00 in a briefcase in St Moritz, Switzerland from convicted fraudster Eric Resteiner for a diplomatic passport.

Dr. Mitchell denied the allegation and claimed that he had only received “approximately US$15, 000.00 from Resteiner as reimbursement for travelling expenses on a trip to Europe.

Timothy Bass, the former chief of security of Resteiner in a sworn affidavit filed in a U.S Court said that he had video-taped the transaction and it was the second payment of US$500, 000.00 given to Dr. Mitchell for the diplomatic position.

There are reports that the first payment was allegedly made to Dr. Mitchell in Grenada when he met privately with Resteiner on his luxury yacht that was anchored on a beach in the south of the island.

When the NNP lost the election in 2008, the then Attorney General Jimmy Bristol and current Director of Public Prosecutions (DPP), Christopher Nelson flew to the United States to meet with U.S government officials to view a videotape of the Mitchell/Resteiner episode and had to take an oath not to reveal the contents of what they had witnessed.