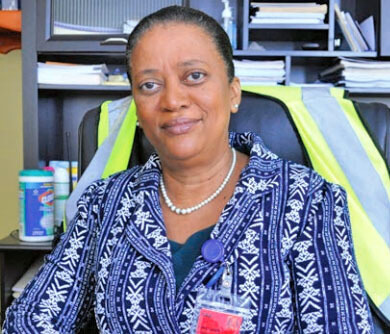 Wendy Francette-Williams is sticking to her position

Opposition to EC$185 million loan might have been the final straw that broke the back in deteriorating relations between the embattled General Manager at the Maurice Bishop International Airport (MBIA), Wendy Francette-Williams and the Keith Mitchell-led administration in St. George’s.

A high-level source in the Botanical Gardens told THE NEW TODAY that the ruling New National Party (NNP) government used the issue of the downgrading of the airport due to the fire-fighting aggregate scandal to move against the Trinidad-born airport manager.

Government said it was left embarrassed after British Airways and Virgin Atlantic were forced to cancel flight to the island some weeks ago due to the downgrade of the airport which was rectified a few days later.

The source said that Francette-Williams was not in favour of the Chinese loan and made known her feelings on the issue to the regime.

She said the MBIA boss viewed the Chinese loan as “a bad idea” since the airport would not be able to generate the money needed to pay back as “the terms of the Chinese thing is not prudential for the country”.

“The woman is versed in she thing whether we like it or not,” she added.

According to the source, Francette-Williams preferred the soft loan that was on offer from the World Bank and this is what she recommended to the government to pursue to upgrade the airport at Point Salines.

She said the NNP regime decided to go with the Chinese loan because it provides “fast money” for the government to start spending in the local economy due to the cash flow problem at the Treasury as a result of the coronavirus pandemic.

The high-level source pointed out that the drawback with the Chinese loan for Grenada is that “as soon as they roll out money interest start running.”

Under the World Bank arrangement, she said the island doesn’t have to start paying back until 10 years.

The source made mention of an alleged tense conversation that Prime Minister Mitchell had with Francette-Williams after he telephoned and “cursed her and slammed down the phone on her”.

THE NEW TODAY understands that the telephone conversation took place before the fire-fighting aggregate issue which was then allegedly used as the red-herring to try and get rid of the MBIA Manager.

The source stressed that Tourism & Civil Aviation Minister, Dr. Clarice Modeste-Curwen got into the act and demanded the resignation of Francette-Williams who disagreed on the exit proposal.

“She told Clarice (Modeste-Curwen) it will not happen so at all – what I will do is go on my vacation leave and when it expires I depart your country…,” said the source.

According to the source, this explains the controversial statement made on GBN’s “To The Point Programme” last week Wednesday by the Tourism Minister about discussions taking place with Francette-Williams on how to resolve the two positions –instant resignation and the taking of the 63 days leave.

The official told THE NEW TODAY that there is nothing to discuss, if the government wants Francette-Williams to go then it would have to pay her for the leave due to her.

The MBIA General Manager has been working without a new contract and under the terms of her previous contract which expired about a year ago.

According to the source, the acting General Manager Joan Gilbert who is a top party supporter has been specially brought in to facilitate the roll out of the Chinese loan for the MBIA upgrade.

“Joan is sent there to facilitate – she is the old guard,” she said.

The source dropped hints that the re-emergence of Gilbert is a clear signal that Prime Minister Mitchell is getting ready for the next general election.

THE NEW TODAY understands that Francette-Williams wanted to quit the MBIA job since the 2017-18 period but Prime Minister Mitchell and his government “begged” her to stay on.

The source pointed out that Prime Minister Mitchell and the NNP administration “are desperate for some money running for some kind of a project so they’re doing this thing with the Chinese”.

She expressed fears that “the Chinese will end up owning that airport” as MBIA will be hard-pressed to repay the loan given the uncertainty in world tourism.

“…The Chinese will end up owning that airport because the government of Grenada in the medium to short-term, there is no visible means of how they are going to pay this thing – I don’t know how they are doing that”.

“The Chinese (are) giving you these loans knowing that you can’t sustain it and then they are coming and take your assets”.

“The Chinese are looking for satellite airport that they can control which will allow their airlines to access Latin America which have a lot of raw resources.

“The Chinese (are) not interested in them little islands – they ain’t have nothing you can give them”.

According to the source, the Chinese are interested in two things in the region – the voting bloc of the islands in the United Nations and access into Latin America for business deals and investment.

She said that China consumes a lot of raw material and need to access natural resources like oil, bauxite, copper, and iron ore.

She also pointed to the strategic location of MBIA for the Chinese.

“If you have that airport in Grenada they (the Chinese) can fly directly to Grenada, refuel and jump off into Latin America directly – they don’t have to go through any US port,” she said.

The Office of Prime Minister Mitchell was contacted for comment on the article but did not submit any response while Francette-Williams said that she wanted to remain “private” at the moment but the Civil Aviation Minister denied making any call on the issue with the embattled MBIA General Manager.