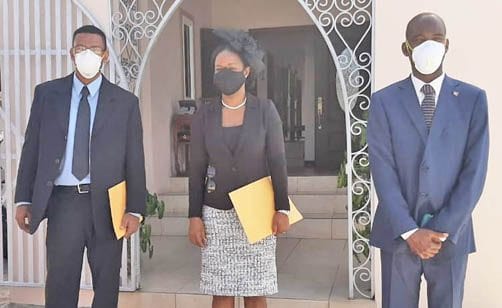 Opposition Senator Terry Noel has given a commitment to push for the development of rural Grenada in the Upper House of Parliament.

Sen. Noel spoke to THE NEW TODAY hours after he received his letter of Appointment to the post Wednesday from Governor General, Dame Cecile La Grenade in a brief ceremony held at her official residence in the south of the island.

Both he and Tessa St Cyr met with the island’s female Head of State to pave the way for them to sit in Parliament as representatives of newly appointed Opposition Leader Tobias Clement.

Sen. Noel said that he was “excited” to take up the position in the Upper House but acknowledged that it could be challenging given the enormity of the work that lies ahead.

He pointed out that he is committed to helping to raise the level of the debate in the Senate and will give support or opposition to issues depending on whether they are in the interest of the people of Grenada.

Sen. Noel is from Mirabeau in St. Andrew North-west which is a major agricultural district on the island.

He was once linked to both the ruling New National Party (NNP) of Prime Minister Dr. Keith Mitchell and the main opposition National Democratic Congress (NDC) in the run-up to the 2018 general election.

Sen. Noel told this newspaper that he would be promoting the need to develop agriculture in Parliament as the sector is key to Grenada’s advancement because it is linked to all areas of the economy.

According to Sen. Noel, he sees agriculture as one of the main pillars of the economy and it will get a lot of attention from him as a sitting Parliamentarian.

The NNP administration has been heavily criticised for placing too much emphasis on Tourism and passport selling under its Citizenship By Investment (CBI) programme as the main plank of the Grenadian economy.

Sen. Noel is a lecturer at the T.A Marryshow Community College (TAMCC) and was offered the opportunity to serve in the Upper House as replacement for former Congress Senator Kerryne James who initially accepted an invitation to remain in Parliament but pulled out last week.

THE NEW TODAY understands that Noel has a degree in Political Science, considers himself a musician, and loves farming and writing articles for publication.

After accepting her letter of appointment to serve in Parliament, Sen. St. Cyr described the moment as “a humbling experience” for her to first and foremost be given the opportunity to make a contribution at the national level.

She said that Dame Cecile did wish her and the other new Senator the best in discharging their new roles in Parliament.

Sen. St Cyr lives in the Pearl’s area of St. Andrew north-east which is represented in the Lower House of Parliament by Minister within the Ministry of Youth, Sports, Culture & The Arts with responsibility for Youth Development, Kate Lewis.

Both Noel and St. Cyr will be sworn in to officially sit in the Upper House of Parliament at the next sitting of the Senate which could be in June.

The new Senators are now expected to play rotating roles with the Opposition Leader in discharging some of his duties including the weekly Tuesday morning radio and television programme on the Grenada Broadcasting Network (GBN).