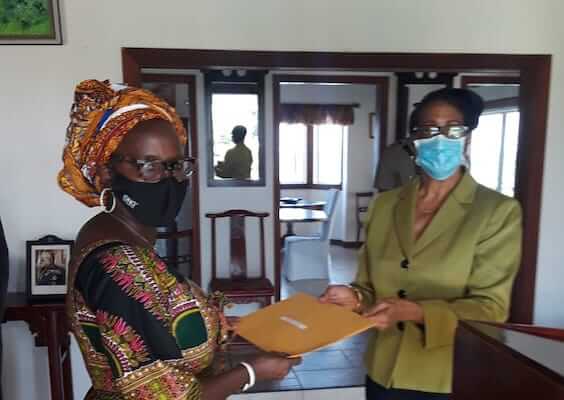 Armed with her instrument of appointment Grenadian businesswoman Rolanda McQueen says she is ready to take on the issues in the country as the newest opposition senator in Grenada.

McQueen is the woman who took on the Spicemas Corporation and challenged Grenada’s Procurement Act.

She did so when her Mount Pure Mineral Water was denied access to be sold at the state sponsored carnival.

Now McQueen, one of three opposition Senators, has gained access to a bigger stage – a seat at the table in Grenada’s Upper House – a chance to participate in national debates and to offer perspective that perhaps can bring about change that she says Grenada badly needs.

She says as the new face in the house she is willing to learn and to listen but she is not going to be “a shrinking violet” – she is ready to take on issues such as child sexual abuse, violence against women and support for Grenadian youth in business.

McQueen was nominated by Opposition Leader Tobias Clement to fill a seat left vacant after the surprise resignation of another opposition senator Terry Noel, a few weeks ago.

Noel gave up the seat to give his full attention to The Grenada Movement, a political party being promoted by Dr Patrick Antoine, a former Trade ambassador for Grenada.

When asked why McQueen, Clement’s response – why not her.

He described her as a patriotic Grenadian saying he is confident that she can serve her country well as a member of the Senate.

The new senator will take the oath of office, swearing allegiance to Queen and Country at the next scheduled sitting of Grenada’s Upper House. The oath will be administered by Chester Humphrey, union man turned president of the senate.