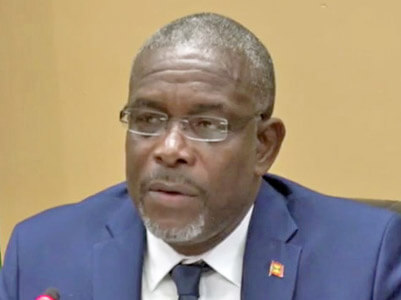 The 3-month-old Congress Government of Prime Minister, Dickon Mitchell, has taken steps to address outstanding external debts, which has made it difficult to access concessionary financing over the years, and landed the country on the “selective default” list in the international financial system, according to Foreign Affairs, Trade and Export Development Minister, Joseph Andall.

The senior government addressed the island’s outstanding debt during Tuesday’s post-Cabinet media briefing in St. George’s, days after participating in the 77th session of the United Nations General Assembly at the UN headquarters in New York, where the outstanding debts were among topics discussed during sideline bilateral engagements.

Minister Andall spoke of having a one-on-one discussion with the Minister of Foreign and CARICOM Affairs of Trinidad and Tobago, Dr. Amery Browne, towards resolving an outstanding EC$80m debt that was contracted by the Grenada Government in 2005 following the passage of Hurricane Ivan and in years that followed.

He told reporters that the process of settling the debt has begun but preferred not to delve into the details at this time as this “may be a politically sensitive issue.”

The Foreign Affairs Minister also alluded to discussions held with the Minister of Foreign Affairs and National Community in Algeria, Ramtane Lamamra to address another longstanding debt issue, dating back to the 1970s.

“Prime Minister Mitchell and I met with the Foreign Affairs Minister of Algeria to address a longstanding debt issue going back to the 1970s, and while the matter has not yet been resolved, initial steps were taken to put in place a mechanism for settling that outstanding debt,” he said.

The senior government minister told reporters that he was not in a position to provide the specifics on this particular debt.

Speculation is rife that the debt was contracted by the 1979-83 left-leaning People’s Revolutionary Government (PRG) of late, Marxist leader, Maurice Bishop.

However, Minister Andall said it was his understanding that “it is a relatively small sum” which over the years grew due to interest that “would have accumulated, making it bigger than it was originally.”

“…We are confident that we would have that matter resolved in short order,” added Minister Andall, who also spoke of there being an outstanding debt owing to the North African country of Libya.

The Foreign Minister also reported on progress made towards paying off an EC$372.1 million debt accumulated under the PetroCaribe agreement with the South American country of Venezuela, which ended in 2019.

“Initial discussions have taken place regarding a mechanism for amortising that debt,” he told reporters.

PetroCaribe is an oil alliance involving 18 Caribbean countries that was established in June 29, 2005, in Puerto La Cruz, Venezuela, and allowed beneficiary nations to buy oil at market value but only pay a percentage of the cost upfront, while the balance can be paid over 25 years at 1% interest.

Under the agreement, Grenada was allowed to purchase oil at market value for five (5) to 50% up front, with a grace period of one (1) to two (2) years, with the remainder being paid through a 17 to 25-year financing agreement with 1%, if oil prices are above US$40 per barrel.

Supplies under PetroCaribe were suspended to most Caribbean countries as a result of plummeting Venezuelan crude output, US political pressure on Caracas, and recipient countries, and at the time, falling world oil, and gas prices that had made it more beneficial to purchase oil elsewhere.

Minister Andall told reporters that Venezuela has indicated that “soon they will be resuming the PetroCaribe agreement,” which he said “could not have come at a better time, considering the generally high price of fuel on the international market.”

According to the latest publication of Grenada’s Public Debt Bulletin, which is published by the Ministry of Finance, at the end of the third quarter last year, the total debt stock (unaudited) of state-owned enterprises was EC$532.3 million or 17.9% of GDP, inclusive of the 372.1 million Petro Caribe debt, which represents 12.5% of GDP.

In delivering the Throne speech, during the opening of the Eleventh Session of Parliament at the end of August, ahead of the highly anticipated 2023 budget presentation, Governor General, Dame Cecile La Grenade, revealed that the country’s public debt stood at $2.1 billion at the end of June 2022, representing (66.2%) of the Gross Domestic Product (GDP).

Prime Minister Mitchell has since announced plans to maintain compliance with the International Monetary Fund-recommended Fiscal Responsibility Act, which was introduced under the Structural Adjustment Programme (SAP) that was undertaken to restructure the country’s debt under the former Keith Mitchell-led administration in 2013.

Additionally, the newly installed Prime Minister said, as part of plans to tackle the country’s debt, his newly installed National Democratic Congress (NDC) government will implement strategic measures to reduce or cease borrowing unless necessary, and to grow the economy, through investments in areas and sectors that can spur economic growth.