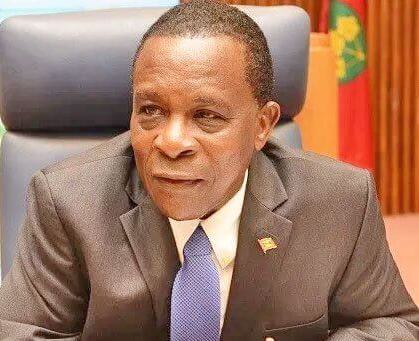 Dr. Mitchell – accused of seeking to introduce draconian measures in Parliament to take away rights of Grenadians

A leading Caribbean lawyer has called on his colleagues in Grenada to challenge in their courts a law which the Keith Mitchell-led ruling New National Party (NNP) government is taking to Parliament on Wednesday for passage with its majority since it is very offensive to the island’s 1974 Constitution.

The top regional barrister-at-law who on Friday night was shown a copy of the bill which Prime Minister Mitchell is trying to use to enforce a long-term State of Emergency on the island to deal with the coronavirus pandemic, charged that it was offensive and repugnant vis-à-vis the Constitution.

He said that what makes the act very offensive is the fact that it seeks to give the Magistrate’s Court the power to adjudicate on issues that “engage your fundamental rights under the Constitution”.

The bill makes provisions for fines of EC$25, 000.00 and a jail sentence of up to one (1) year for persons who violate the regulations.

According to the lawyer, the measures being taken to Parliament by Prime Minister Mitchell will “collide violently” with the constitution of Grenada and can best be described as the work of “a panicking dictator”.

“There is absolutely no necessity for this kind of thing. These Ugandan-style measures should be resisted by right-thinking and people with cool heads,” he said.

He labelled the proposed law as “most unfriendly to the Constitution” and can be described as “worse than Martial Law.”

The senior lawyer warned that the measures are “over-broad, sweeping and disproportionate” in nature and that one of the most dangerous things is that the proposed law leaves to what he called “unjudicial and lower level” persons like Health officials and police officers including Immigration the power to determine what limitations can be imposed on fundamental freedoms of people.

He expressed fears that if this law is passed in its present form it can leave people in these professional positions with political inclination to infringe on the rights of people.

“This is not Uganda under Idi Amin. It (the proposed law) is ugly, and has no place in a modern society,” he remarked.

The lawyer warned that a politically inclined police force can be used by the Political Directorate to engage in discriminatory action against persons who are deemed as opponents of the regime.

He said that Grenadians should be alerted to the fact that the proposed law that is being taken to Parliament by the Mitchell-led government can be used as “a suppression tool” by the administration against its political opponents.

He suggested that a democratically-inclined government would seek to use existing public health laws to deal with the Covid-19 situation and States of Emergency rather than turn to draconian and dictatorial measures against its people.

The lawyer charged that these measures being contemplated by Prime Minister Mitchell are even more expansive than colonial public health laws used during the colonial era when maximum power was in the hands of a British-appointed Governor.

He said that the drafting of these proposed measures to deal with a health pandemic like the coronavirus seems to suggest that there is some “hysteria and intoxication with power” by those now running the State of Grenada.

According to the lawyer, the bill should be resisted by all sections of the Grenadian society since it amounts to an attack on the rights of citizens as guaranteed by the constitution.

The lawyer urged his colleagues in Grenada to mount a challenge to what the Mitchell-led government is bent on taking to Parliament to curtail the most fundamental rights of the people.

As a public service, THE NEW TODAY reproduces in full the controversial bill that is now in circulation among the island’s Parliamentarians: