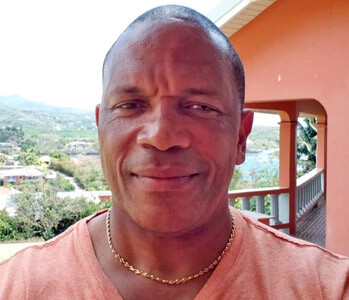 The anti-Veda Bruno-Victor forces within the Grenada Olympic Committee (GOC) has been bolstered with Saturday’s election of former Olympic boxer Bunny Wilson as President of the sporting organisation.

A source close to the body told THE NEW TODAY that Wilson is definitely not an ally of the controversial but powerful and long-standing General Secretary Bruno-Victor and is expected to help in the clean-up of the organisation.

“No, no, no way,” said a GOC executive member as he confirmed that the new President is not in the corner of the General Secretary.

Bruno-Victor along with the retired Royston La Hee who stood at the helm of the local Olympic organisation for 38 years have been the dominant faces on the body for over three decades.

The GOC has been rocked by a major financial scandal over its failure to account for an estimated EC$440, 000.00 given to it for the development of sports on the island by Olympic Solidarity (OS), an arm of the International Olympic Committee (IOC).

A damning report prepared by an internal committee, headed by GOC executive member Ralph Lord found massive irregularities in the use of the funds with fingers pointing heavily in the direction of the General Secretary.

GOC has failed to meet OS demands to account for the funds and was told that failing to do so would result in it having to repay the money.

According to a key member of the local executive, a lot of corporate sponsors in Grenada have turned down requests from GOC for financial support in light of the OS money issue.

He said that this issue has become “a big stain” on the sporting organisation as it continues to remain unresolved.

He stated that GOC is also having difficulties in “commanding respect” after the OS financial debacle became public.

The official believes that Bruno-Victor should step down from office despite her recent re-election as “her remaining there is just damaging Grenada’s credibility and potential.”

“I don’t know how they are going to go forward,” he remarked, adding that, “…I am positive that Bunny (Wilson) wants to deal with that (messy situation).”

The executive member also questioned the failure of GOC to evoke its Disciplinary Committee to deal with those who have been implicated in the OS financial scandal and take decisive decisions against all those who are culpable.

The anti-Bruno-Victor forces on GOC have acknowledged that one of her strengths centers on her ability to “place people in positions” to serve her needs.

THE NEW TODAY understands that the last executive meeting of GOC was very contentious and the acting President Chenny Joseph eventually walked out of the session.

An insider said that executive member Ralph Lord who was considered an ally of Joseph became suspicious that he was leaning towards Bruno-Victor in recent times and took a turn at him during the meeting and the acting President walked out and the meeting came to an abrupt end.

Joseph, the 1st Vice-President was acting as GOC President when Charlie George, considered as part of the Bruno-Victor faction on the committee stepped down after months in office, complaining of not getting the co-operation of other executive members.

The GOC insider said that the organisation was forced to hold early election for the Presidency as it was unwise to have an Acting President to run the organisation for almost four years to carry out the remainder of George’s term in office.

He said that the last executive meeting was very contentious with the General Secretary pushing for the election process to be conducted along the previous line of persons submitting their intention to run for the top position.

He spoke of several persons holding the view that this was not necessary and candidates should be allowed to be nominated from the floor on Election Day.

“She is fighting for survival still,” said the source of Bruno-Victor and her ambition to influence the electoral process to get one of her allies to be elected to the Presidency.

According to the insider, there were a lot of arguments at the last executive meeting with some wanting to postpone the election but it was held and Wilson was the only candidate and Joseph did not turn up on Election Day.

Joseph was also defeated weeks earlier for the Presidency of the Grenada Football Association (GFA) that he had led for over a decade.