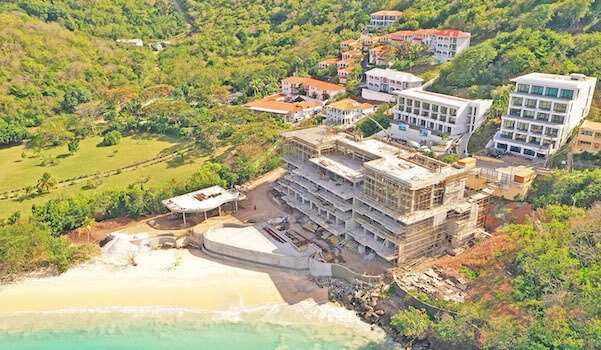 Prime Minister Dickon Mitchell has dropped very strong hints that his National Democratic Congress (NDC) government would like to settle the dispute with U.S-based former Grenada Ambassador Warren Newfield and his resort, instead of going through an expensive arbitration process that was initiated against the former Keith Mitchell-led administration.

Speaking at a post-Cabinet press briefing on Wednesday, the Prime Minister said he is prepared to indicate publicly that the government of Grenada “is prepared to consider alternatives to resolving this matter other than via arbitration.”

The project developers decided to take the matter to international arbitration after the Keith Mitchell-led New National Party (NNP) government took steps to block True Blue Development company from getting additional funding from the passport-selling scheme, known as Citizenship by Investment (CBI), to fund the completion of its hotel project in the south of the island.

According to Prime Minister Dickon Mitchell, the new regime in St. George has inherited a situation in which there is an ongoing dispute between the hotel developer and the State of Grenada.

He told reporters that at the end of the day what the people of Grenada have been left with by the previous administration “is a white elephant standing at perhaps one of the most spectacular locations in Grenada with no end in sight to the hotel being completed and becoming operational.”

“…As leader of this State we must find a way to complete this hotel, have it operational and functioning so that it does not remain an eyesore on the southern tip of Grand Anse beach.”

“That hotel was in fact being built by a local company mainly that had over 200 workers working there. They were sent home, the site was closed and I’m yet to date to be provided with any explanation by the former administration as to why the hotel had to be closed, why the workers had to be sent home and why the State of Grenada has to be facing a $200 million arbitration at ICSID.”

“Those are the matters that occupy my mind and those are the matters that we have to ensure is addressed and from where I sit I am prepared to explore all possibilities to have a sensible and fair resolution of this matter so that we can get the hotel completed and we can get the hotel operational and we can add more room stock to our tourism stock so that we can continue the development of tourism in Grenada.”

In June 2021, True Blue Development Limited (TDBL) filed claims against the Government of Grenada at the International Centre for Settlement of Investment Disputes (ICSID) asserting that the government of Grenada blocked their efforts to complete the five-star luxury Kimpton Kawana Bay Resort on the island.

Washington-based ICSID is an arm of the World Bank devoted to resolving international investment disputes against sovereign states.

In TBDL’s notice of arbitration, they alleged that the Grenada Government began “squeezing” the resort development.

“In December 2020, Grenada withdrew the August re-confirmation of the US$99m budget. Grenada left it unclear whether that withdrawal impacted the earlier budget but, after True Blue attempted to negotiate a solution, Grenada’s Prime Minister [Keith] Mitchell made clear that True Blue would not be allowed a US$99 million budget.”

In a statement sent out by the company, they said: “True Blue submits that the urgency of the ICSID filing reflects the essential need to protect investors in Kawana Bay from what claimants say is an obvious scheme by the Government of Grenada to thwart the successful completion of this world-class resort.”

“Three of the buildings at Kimpton Kawana Bay are largely finished, and some 92% of condos have been spoken for, either through outright purchase or by confirmed reservation. However, last December, the Government of Grenada started ‘a surreptitious, multi-front effort to squeeze the project into failure,’ according to the ICSID notice for arbitration filed by True Blue and its investors.

Former Prime Minister Dr Keith Mitchell has gone on record stating that he was “not aware” of TBDL’s principal Warren Newfield having an interest in using the CBI programme to finish the project. Mr Newfield is also the former Ambassador at Large and Consul General in Miami for Grenada, a position he resigned from in May 2021, when this impasse with the Grenadian government began to develop.

Dr Keith Mitchell also alleged that TBDL had to show that money was in an escrow account if it wanted to take advantage of the CBI arrangement in Grenada, something that is in law.

TBDL’s statement continues, “Funding for the project primarily comes from private investors participating in Grenada’s Citizenship by Investment Program (known as “CBI”), through which investors purchasing condos at Kawana Bay are able to gain citizenship. Grenadian citizenship affords visa-free travel to more than 140 nations worldwide. Owing to Grenada’s unique E2-Visa treaty with the United States, citizens are also eligible to invest in U.S. businesses and live there with their families.”

“Although funding did not come from government sources, True Blue alleges that the Government’s financial squeeze included revoking a 2017 approved project budget of US$99 million, imposing administrative rules that limit how the developer could use of investors’ money for the project, and ultimately halting approval of CBI applications that provide the principal source of capital.”