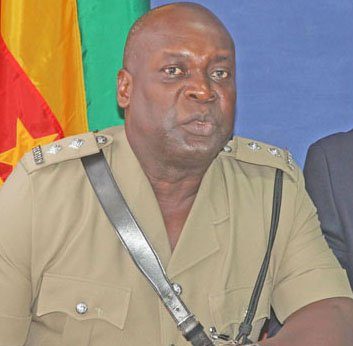 ASP Glenroy Corion – the officer in charge of the Fire Department

Head of the Fire Department within the Royal Grenada Police Force (RGPF), Assistant Superintendent of Police (ASP) Glenroy Corion has cited the need for more fire hydrants to be installed within the Town of St. George.

ASP Corion made the statement at a press conference in response to a question posed by a member of the media about the fire hydrants in the city and their locations in light of the challenges posed to firefighters in dealing with the recent spate of major fires in the city which destroyed four buildings including two homes.

Pointing to the range of activities taking place within the Town, ASP Corion said that his department “definitely needs more (fire) hydrants within the Town to do our operation (and) to protect the citizens of this country”.

“We have developments taking place, people (have) businesses and there are homes around, so, we need more hydrants,” he remarked.

The fire chief also indicated that during monthly inspections by his department, it was discovered that some of the water hydrants are “defective” and this has been reported to the state-run National Water and Sewerage Authority (NAWASA) which has the responsibility to get them back in operation.

Due to the lack of resources in the wake of the recent series of fires occurring in and outside the parish, the fire department has had to call on additional resources from St. George’s University (SGU) and the Maurice Bishop International Airport (MBIA).

Responding to questions posed regarding the department’s ability to fight a fire that may break out in taller buildings in the city, ASP Corion said while the department has a “fighting response capability in terms of pitching a ladder according to the height of the building,” with the emergence of taller buildings in Town and throughout the country, there is also “need for trucks that are equipped with ladders to reach some of the height to do our work more effectively.”

According to ASP Corion, the fire station at the International Airport at Point Salines is the only one on the island that is equipped with trucks of this kind.

“We do need it, we don’t have at his time, only the airport is equipped with such trucks,” he said, disclosing that “specs have been sent to see if we can push on that effect in terms of moving forward.”

He said while the current fire trucks “have the capacity to suppress” both bush fires and building fires, “the department is now looking towards equipping itself with trucks with tanks that can contain water and foam in going forward.”

Acting Commissioner of Police, Edvin Martin who also addressed the press briefing, reaffirmed that “part of the fire response mechanism is to try to have collaboration with stakeholders, particularly in the dry season.

He said “the strategy is rather than having a fire truck having to leave a scene to refill and not do suppression, you can have a chain of supply tanker trucks providing the water that is needed to keep fire suppression sustainable hence the support we have with SGU and a lot of private water trucks actually work with us in this regard mainly in the dry season.”

The Police Chief also cited need for the fire department to have “in-house capability for initial deployment that a tanker can go out to assist the truck with an immediate resupply to the truck rather than having to leave the scene of a fire to refill, while we wait for our stakeholder response in collaboration to support to the department.”

The Keith Mitchell-led ruling New National Party (NNP) government has set aside EC$50 million in the 2020 budget for RGPF.

Commissioner Martin told this newspaper that there is no specific allocation in the current budget for the Fire Department but that monies are given based on certain needs.