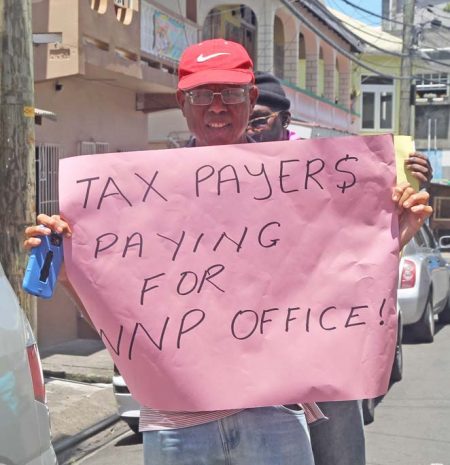 “We are going to continue this protest, it is not a question of numbers but a question of keeping the issue alive and getting the message out there that corruption is costly (and) hindering the development of our country.”

Those were the words of Joseph Andall, the Interim Political Leader of the National Democratic Congress (NDC), on the occasion of the fifth in a series of ‘silent’ protests against corruption involving the Keith Mitchell-led government held last week Thursday in Gouyave, St. John.

Although small in numbers, supporters of the fight armed themselves with placards, generating a lot of attention as they paraded from an area called the Lance in Gouyave on to the outskirts of the Curtbert Peters Park to send a strong message denouncing corruption under Mitchell’s ruling New National Party (NNP).

Speaking with THE NEW TODAY during the protest action, Andall highlighted one issue of grave concern where some students were unable to go back to school because their schools were unrepaired. 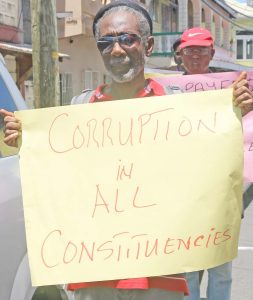 The Interim Congress Leader pointed out that this is happening while “we have a situation where the Government of Grenada and by extension the taxpayers of the country (are) paying approximately $1m over a 3-year period for the cellphone bill of an NNP party activist and mouthpiece”.

“So, we are not going to remain quiet, we are going to keep the issue alive,” he declared.

The NDC has been conducting these protests at fortnightly intervals, with two (2) already staged on The Carenage in St. George’s, one (1) in front the Esplanade Mall on Melville Street and one (1) in the town of Grenville in St. Andrew.

Andall said the public have been “generally supportive” of their sensitisation efforts, with “most of them expressing their wish that they could have participated but because of the climate of fear, intimidation and the whole vindictive nature of the administration most people are afraid to show their support publicly.”

“…We have the moral support of a large number of people in the country wherever we have been,” he said, adding that “the protest will take different forms as we go forward. 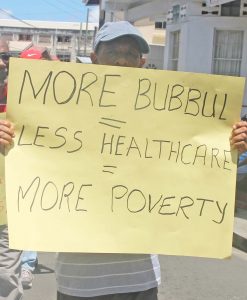 “So you can look forward to that protest continuing,” he quipped.
According to Andall, “corruption in Grenada in not perceived” but it is happening “right before our very eyes”.

“And in fact, the corrupt ones have openly admitted to it. We have Sheldon Scott openly admitting. We have had the ‘father of corruption’ (Prime Minister Keith Mitchell) himself talking about it…but it seems as if he has forgotten that he is the one who has been presiding over the system for 20 of the last 25 years,” he said.

“He (PM Mitchell) is the one who has put in place the people who are practicing the corruption and therefore he has to take responsibility for it,” Andall said, as he announced that the NDC is exploring legal options in its fight against corruption. 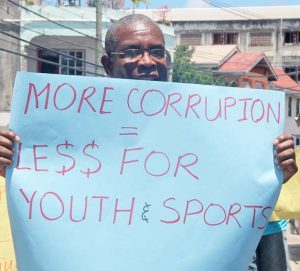 “At the moment we are in discussion with some attorneys and as you know in order to be able to bring a lawsuit one has to have what is called legal standing. So, we are examining the different statutes, looking at common law precedence in other countries and we are definitely going to peruse the legal angle once it is feasible,” he said.

“The government and the New National Party should not get off the hook with ripping off the people of this country for decades,” the NDC leader declared, pointing out that “all over the world people are being brought to justice for defrauding their fellow citizens”.

“We see right now on our doorsteps in neighbouring Trinidad & Tobago and even in African countries, which was once the haven for corruption (are) cleaning up their acts (while) Grenada is going in the opposite direction, where corruption has been becoming more and more entrenched and it has got to the point where some people are even beginning to accept it as normal,” he remarked.

Andall stated that “whenever corruption becomes the norm (then) you know that you are heading for a Sodom and Gomorrah type of destruction in our country.”